TWGB: A Case of Bricks and Bits 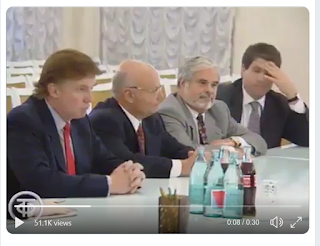 The interesting thing about the Trump/Russia connection with respects to his eventual presidential campaign in 2016 and then, presidency, is that it is a story about actual bricks and mortar real estate, which is some respects is the real cradle story of Donald Trump's life, and the digital warfare world of modern democracy. The screencap at the top of this post is from a video posted on Twitter that seems to depict Trump meeting with city officials in Moscow in 1995.  I haven't found a word for word translation of the voice-over, but that Trump definitely did make visits to Russia and discussed plans for building there over a thirty year period is just known.

It's with that in mind that I note that the closest thing that we have to news from the end of last week (How jaded am I that I want Fridays to bring announcements of indictments? Is it not enough that I know that several are still under seal and will be revealed in due time? But what about my time?!) is that we finally know who was at the end of one of the blocked numbers that Donald Trump Jr. dialed after the meeting with Veselnitskaya and all of them. It was Howard Lorber. Which kind of sounds anticlimactic if you didn't know that Lorber had deep ties to Russia and has accompanied Trump Sr. on one of his jaunts to seek the Holy Grail of a Trump Tower Moscow. Knowing that, it kind of makes you wonder if Don Jr. was a little more in the loop regarding Sater and Cohen's talk about a connection between the hope of a Moscow Trump Tower and the hope of a Trump White House than he informed Congress of. (And in any event--maybe Mueller will be getting his hands on the complete transcripts to crosscheck the lad's accuracy?)

Anyway, Buzzfeed, which I am mad at for firing many extraordinary super people and doing it in a really shitty slow-torture way (also Vice and others, and I really wish I could win the lottery and hire everybody and start a Strangely News Empire), is still punching up with the mad journalism, by going further than the Trump Moscow Tower LOI or the tentative blueprints, to showing there was actually discussion of sites.

Trump was bald-faced lying pretending there was no relationship to Russia at all, but the degree is starting to seem really inconvenient in retrospect, especially now that a person connected to that June 2016 Trump Tower meeting, Rinat Akhmetshin, seems to have gotten funds after that meeting that would make sense if he was being paid for lobbying to get Magnitsky sanctions dropped. It really looks like people associated with Russia thought Trump was their conduit to get things done, and the obvious leverage they had was his ego and his thirst to get a Moscow deal done.

Is there any wonder then, that intelligence professionals from other nations are asking whether information Trump receives in intelligence briefings is being transmitted to Russia? They have ample reason already to think that Trump is beholden to Putin. And his behavior never makes that seem less possible.

But this is just the brick and mortar side of things, darlings! There is also the weirdly parallel investigations into what Wikistrat (which prefers to think of itself as not being a part of Psy Group) "guessed" about cyber-mercenaries in 2015, that kind of sort of dovetails what actual possible mercenaries like Cambridge Analytica did.

Whatever happens in digital space has resonance in meat space, no? So the investigation of the loads of money sloshing about during the woefully-attended Trump inauguration is a worthy thing.

I am describing the Trump/Russia case as existing in bricks (potential--an as yet unbuilt Moscow Tower) and bits (actual--as in so many emails and texts). This is also the way I see the Mueller case as being built--by indictments and public records that can't be erased. There has always been a discussion about the Mueller report as a final product that winds everything up in a neat little package that we all will see eventually. I don't know that this is what is happening. I think it is unfolding now, little by little, but the entire end product might be blocked from our view.

This is why I try to faithfully report the things I think we learn a little bit at a time. It matters that we have a grossly incompetent and badly compromised Chief Executive. This is a kind of national insecurity that we have a duty to democratically remove. There are means. We only need the knowledge and the will.