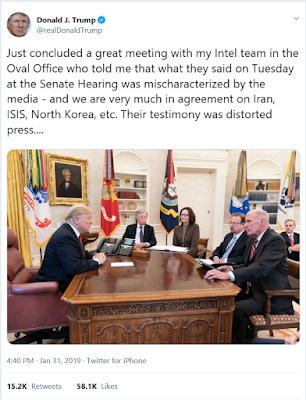 This is going to be a pretty short post because it's already the wee hours and I am certain there will be great shades of fuckery to confront on the morrow, but there is something especially weird about the tendency that President Trump has to undermine the various intelligence agencies who actually do the work of gathering information and analyzing it to provide context that should inform Trump's decision-making process. This relationship should not be either adversarial, nor should it be a top-down thing where Trump dictates what "reality" is.

The IC has provided credible information that ISIS is still active, that North Korea has not stepped down its nuclear program, that Iran is still largely abiding by its nuclear agreement, and that while border security is important, the overland threat is sort of not that big a priority. And Trump rubbishes it all, and then posts the above Tweet that tells us not to believe our eyes and ears about what IC professionals who have sworn an oath to protect and defend this country are saying, believe Trump! Trump might trash treaties and hate NATO and not even understand what defending allies is about, and for that matter, believes climate change is a hoax even though the Pentagon takes it seriously now, and has been doing so for years.

Any person with an open and rational mind, being confronted with information from people who have made it their lives' work to provide high-quality information in the service of their country, would try to incorporate at least some of it into their own frame of reference to try and do their own job better.

Not Donald Trump. He seems to find expertise suspect and is intensely uncomfortable with the very idea that he might not be the smartest person in the room. And it seems like he prefers to take his cues from actually stupid people, like the cast (I cannot call them "journalists") of his favorite shows on the Fox News channel.  Could anyone think for an instant that Lou Dobbs knows more than the FBI about law enforcement or counter-terrorism? (Dobbs has the distinction of being an original "birther" and having been dropped by CNN for his especially anti-immigrant views. His only distinguishing quality seems to be his bigotry.) Let alone weighing in on the rare genius of other Fox personalities like Tucker Carlson and Jesse Watters, who do not understand that the sun and wind still can generate electricity even when it is very cold, because they are functionally science illiterate, and who promote racist propaganda because they are...

Well, by any stretch, not persons who should be trusted over the actual people doing national security work, anyhow, regardless of whatever low esteem they should actually be held in. But it nonetheless remains that Trump, despite having qualified professionals that could provide him with good information, prefers his entertainment to inform his world.  Quite possibly because he lacks the attention span for anything other than "the shows".

But there are fewer professionals available to try and amend Trump's odd mental topiary,  owing in part to the thanklessness of the job and Trump's own limited arsedness to replace the brain-drain in his administration with good quality people, if he could even get them. In fact, his recent shut down was explained somewhat anonymously as an opportunity to purge careerists--quite baldly admitting that expertise wasn't really the Trump Administration's thing.

Long story short, Trump harps on the Deep State because competent people see through his bullshit, and this gives him a lot of discomfort. So how long will anyone want to stay on when words will be put in their mouths, and their genuine assessments will be supplanted with Trump's casual falsehoods? Especially when he prefers, when his lie is called out, to continue not listening.
Posted by Vixen Strangely at 1:54 AM