This is a Pretty Rough Roll Out

Extended footage: Watch a heckler go after Howard Schultz, the former Starbucks CEO who is weighing a potential bid for president, at his book launch event in NYC: "Don't help elect Trump! You egotistical, billionaire asshole. Go back to getting ratioed on Twitter." pic.twitter.com/7wAYH4cLwV
— Mother Jones (@MotherJones) January 29, 2019


When Howard Schultz announced he was planning to run as an independent in the 2020 presidential election, there was rather a lot of well-deserved skepticism expressed on Twitter.  A lot of people have noticed that there really isn't a market for a billionaire political neophyte and that there really isn't a political appetite for a person who might be described as socially liberal and economically conservative: 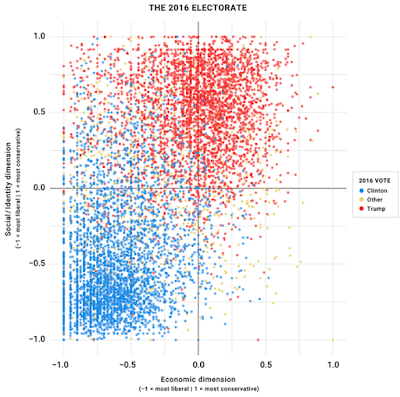 The "silent majority" that he refers to is silent because it isn't there. (Donald Trump used this phrase too, echoing Richard Nixon. Trump won with conservatives, for the most part. )

There also is a not-unreasonable alarm that an independent candidate is way more likely to act as a spoiler than to actually be a viable candidate. This is exactly the scenario I saw as likely three years ago with the possibility of a Michael Bloomberg run, and Bloomberg came to that exact conclusion and said as much about third party runs regarding Schultz.

This doesn't mean there isn't a small pool of people who will love this idea: "both-sider" journalists who proclaim that both parties are awful (but particularly Democrats, because there is no such thing as "the liberal media"); people who want a piece of Mr. Schultz's not-inconsiderable funding; and Donald Trump, who has already taunted Schultz online in a way that he hopes encourages his White House ambitions.


Trump told the crowd at the Trump Hotel tonight fundraiser that he was trying to get Howard Schultz into the race with his tweet earlier today because he thinks he'll help him, per attendee.
— Maggie Haberman (@maggieNYT) January 29, 2019

Hopefully, Schultz doesn't need to be thwacked with a clue by four to get that this idea may have been better on paper than it will be in practice. If he wants his good to do the most, there are tons of deserving causes--but the presidency should not be treated as an entry-level position into government.

UPDATE: Just to add, these advisors absolutely, 100%, know better.
Posted by Vixen Strangely at 12:40 AM

Hey Vicky,
you know, I think I agree with you, and that rarely happens when the subject is restricted to politics.

Here's the thing, however. My view is that after Jim Webb and other moderate Democrats were de-legitimized in the party, it created a vacuum. In the past we have had reasonable Democrats who shared the political views of a broader segment of the population. So many of them have been squeezed out of the party, it has created a number of voters looking for a place to go. And I am sure that this is part of Howard Schultz's calculation.

A lot of voters would prefer not to vote for Trump, but they are Democrats who do not favor an extremist position. Schultz sweeps in to try and capture voters with that sentiment.

I don't think it will go too far. However, the Democratic Party would do well to realize that kicking out a huge number of your voters is not a good way to win elections.

I think that political parties have reached the point that they are often impediments to a solution. George Washington was afraid this would happen, and he was prophetic. We have problems, and we kneed solutions, and yet there are far too many ideologues on both sides who will prevent a solution because of their loyalty to party rather than the people of the United States.

You do have a point about parties being imperfect vehicles. One of the things that I've noticed is an exceleration of polarization--just like the direction of the Democratic party makes it difficult for a Jim Webb to run a national race (and may in some respects be what did in Sens. McCaskill and Heitkamp in their fairly red states--they didn't quite fit the taste of their constituencies now, where moderate Dems a la Manchin can get on in a red environment), the direction of the Republican party has left its share of never Trumpers--I note that one of them, Steve Schmidt, used to be part of the 2008 McCain team and went on to do his share of apologizing for Sarah Palin (but she wasn't unpopular with the folks who went on to support Trump!) and making the kind of speeches that liberals like me found attractive--is now a Howard Schultz adviser!

(I think he might be a little bit like a man without a country when this is over. Neither side will know what to do with him.)


What's happened seems to be the while blue areas are getting bluer, the red areas are getting redder (the GOP remaining the House, for example, are more the Freedom caucus folks). I think that does leave the sides without what I'd call a "political language in common".


The way I look at it is, politics is local. One of the funnier things I've found about politics over the years is that some of the best strategic aphorisms are out of conservatives--a person who is 80% my friend isn't 20% my enemy is a Reagan sobriquet, but well in line with the idea that so-called "blue dogs" shouldn't be considered "fake Democrats". Also WFBuckley's idea for Republicans to support the most conservative candidate *that can win an election* seems to hold water in the converse--Dems have to also consider not just the most liberal candidate that fits our views, but that also is electable. What fits my east coast blue collar city might need to be delivered differently in Kansas. (The tendency of the GOP to primary so-called RINOs has been kind of the same thing.)


If Schultz wanted an ideas and policies debate within the Democratic party, though, the primaries start in Iowa and NH, where I think a moderate would get heard out. But what I've heard so far from him sounds like clichés he could have printed on, well, a coffee cup.