TWGB: The Truth Shall Set You Free 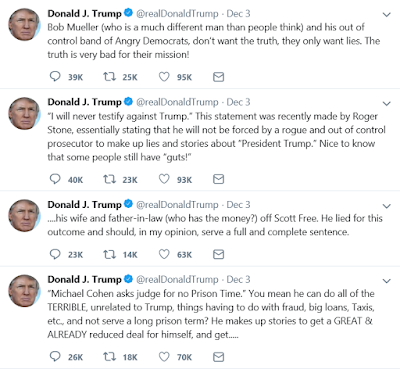 The best place to start the post is with Trump's tweetstorm from Monday, wherein he implied that his longtime associate, Michael Cohen, had done terrible things (with Trump's knowledge apparently), and that he should under no circumstances receive any kind of sentencing deal for his cooperation in the Mueller investigation. He also indicated that the better example was set by Roger Stone, who had vowed not to testify against Trump, and also sort of tilted his hat at the peculiar claim by Larry Klayman on behalf of Jerome Corsi, that it was Special Counsel Robert Mueller who was trying to suborn perjury by leaning on witnesses to lie, instead of being engaged in a truthful fact-finding mission, which grasps at the same kind of "conflict of interest" straws as Trump's claim regarding "Angry Democrats".

Well, why wouldn't President Trump echo the ideas of Corsi's defense team? After all, he and Jerome Corsi have a joint defense agreement, almost just like the one Trump has/or had with Paul Manafort, according to Corsi who was told it by Jay Sekulow (who is so a good lawyer, stop that!) with the difference being I think Manafort is more screwed (because state charges)and yet Manafort is the one I've heard more newsiness about getting a pardon. Also--Mueller has Stone/Corsi emails, which might just be enough without Corsi--

Or without Stone, who is pleading the Fifth. (Egads, it only feels like it was a year and half ago, give or take a century, that it was Michael Flynn pleading the Fifth.) He will show up to any opportunity he is subpoenaed to and will say nothing. And he'll be goddamned if you take his papers, either. Also, maybe Mueller could get a warrant. Or grant limited immunity to get him to talk about, you know, other stuff. He is not a dead end, yet.

Anyways, don't worry--based on Tweets like these, the JDAs and some of the "who talks, who walks" stuff all looks like orchestrated obstruction of justice on Trump's part, a little bit. Or so noted conservative lawyer George Conway seems to think:

The statutes being mentioned here are, well, about witness tampering and obstruction--which is, after all, the crux of the Mueller purview: initiated with whether Trump was trying to tamper with Jim Comey and then fired him to stymie the investigation into whether Russia helped Trump (which it pretty ostensibly did). Folks may well grumble about whether the investigation is taking its sweet time--but this is bosh--it's been terribly successful at getting indictments, guilty pleas, and even a few convictions, and it could certainly be shortened: by people telling the truth more! (They could also probably try not continuing to obstruct justice in other ways.) But it is clearly by no means done, yet.

The best reason we have for knowing this is the Michael Flynn sentencing memo we waited so long for this Tuesday.  Michael Flynn has pleaded guilty to lying about his Russia contacts and has now been interviewed 19 times, and has been very forthcoming about more than one investigation (?) with so many details redacted it is not even cute if you are a Trump or related personage sweating it. Because all that "redacted" means there is more truth out there. And Mueller has a pretty good idea of what it is and where to get more.

Michael Flynn is a great case where offering lower sentencing is a good deal for him--he was facing a lot of damage, as Martin Longman points out.

One great resource I have seen about this is Ryan Goodman's perjury chart, which gives a great overview about who, so far, has demonstrably lied about what, and which includes folks like Jared Kushner and Don Trump Jr, who haven't yet been indicted, but potentially could be.

So, it is to be noted, it is Robert Mueller who is sending the message "The truth will set you free". It is Trump who is saying "Keep shtum". Now, "tempus tacendi et tempus loquendi" is a very fine device for the Trump coat of arms, but maybe with applied friction, that "tempus loquendi" will start seeming more desirable?

But why is it Trump demands so much silence? (hush money, NDA's?) It looks like he is always about squashing the bad news that follows him as exhaust follows a bad muffler. He seems allergic to truth--

Maybe because he thinks it will do anything but set him free?
Posted by Vixen Strangely at 12:17 AM