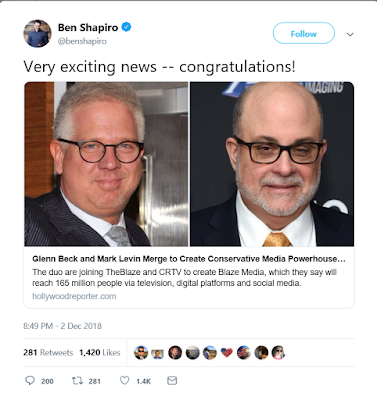 These are all people who exist. People pay them for the ideas they have. I do my shit for free. And I even read stuff. You want to know why I think conservatism is some bullshit? This. Exactly this. However, if they all merged into a singularity called a "darkweb hole" and got spaghettied into nothingness, that would be kind of cool. Because the chaps therein assembled aren't the greatest at staying platformed. Mostly because of so much sucking.

This isn't about the Left hating on conservatives--this is about normal people looking at weirdo haters and figuring out that these are basically fascists and people who make shit up. You don't have to be explicitly Antifa or IWW to figure out that Mark Levin has guano for brains and makes actual conservatives flinch, or that Glenn Beck is a bottom-feeding grifter. (And that Gavin McInnes quitting Proud Boys is mostly so he can go back to yanking it, I think. Also Matt Kibbe needs to learn that there is no political ideology solely based on interesting facial hair. That is not a thing. ) And there is negative value in that. We would also suggest that conservatives consider if they also are tired of fascism and making up shit.

This would settle a lot of our private bets. But if Ben Shapiro wants to be a part of that human centipede of crap-sucking, at least he is fully qualified to play the world's smallest violin when it craps it's own bed. Or exists for a thousand years like FreeRepublic or Drudge seem to have but still needs a little night music.

I'm just saying it looks to me like a match made in hell that will be super the worst. That's all.
Posted by Vixen Strangely at 1:12 AM

You are awesome. Keep it coming.