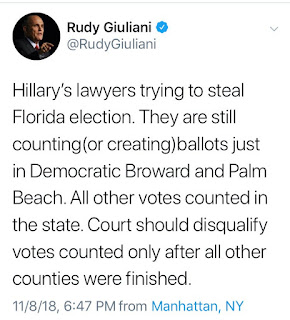 I am entirely amazed at the resourcefulness of one Hillary Rodham Clinton, who based on all the medical experts who were paying close attention back in 2016, wasn't even still supposed to be alive right now, what with all the Parkinson's and brain damage and what not, that she is still out here fiendishly stealing elections for other people in 2018 (like she, um, did not do in 2016 for herownself). Or so Rudy Giuliani, one-time presidential hopeful, and current Trump lawyer, wants us to imagine.

The unvarnished story appears to be that Rick Scott, current governor and possible future senator of the great state of Florida, would very much like to see a manager because somebody is still counting these votes and he might not stay ahead. He has a little problem with this Florida law that triggers an automatic recount if the margin is...

Ah, fuck me, I have been here before. If we're older than 18, we all the hell have. It's the long national nightmare again, isn't it? Where, for some reason, Florida's election law says all the votes should be recounted, but there's a special, invisible ink "dibs" where GOPers think maybe this shouldn't always be true if electing a Republican is at stake, right? 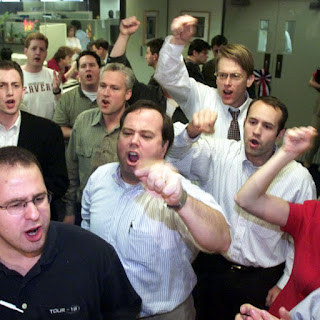 Because there will be a popular revolt, where "popular" means a rent-a riot of GOP stalwarts from out of town will swoop in to stop the counting of the actual Floridians' votes. In other words, a kind of mob. (I thought those were supposed to be the worst, though, right? Ask Ann Coulter, or Derek Hunter, or some orange peel-wrapped rancid bacon sculpture like Donald Trump.)

Or maybe, just saying, instead of being the kind of guys that Scott and Giuliani are actually being, Florida could just, I don't know, follow the actual election rules as they were written and see what shakes out in the game as it is supposed to be played? Especially when it's a likely recount for US Senate, Governor, and players to be named later? Instead of being the kind of drama that goes all the way to SCOTUS, which was always kind of stupid. But now, it would be even more stupid, because Justice Bro Keggernaugh.

This isn't even addressing the extra-special crispy fried fuckery that is whatever is going on in Georgia (Jesus be a legitimate and fair run off with all the machines present and working) and probably Arizona, where Democrat Kyrsten Sinema is now up because of the mail-in ballots, and now the GOP in AZ doesn't want to count all of those.

Which is not to say not all Arizona Republicans get it:

@AZGOP I am one of those mail in ballots. I was under the impression my vote was always counted.
— Cindy McCain (@cindymccain) November 8, 2018

(I respect this lady.)

We have dealt with voter suppression, from purging of the voter rolls to voter ID laws that can't really address an in-person voter fraud problem that doesn't actually exist, to try and rustle up the people to just know that they have a voice. I have so much respect for the way some of these challenged but still rising stars worked their asses off to try and increase the map of who we think of as "likely voters". But. This sort of thing, right here, the actual clear message the GOP as a freaking institution, puts out that they are not interested in actual "one person, one vote" where any of those people might be demographically likely Democratic voters, is an outright admission that they don't really love small "d" democracy or perceive that what they are doing is extremely divisive because it means they want, not to debate people who differ, but to erase their vote--their ballot-voice.

How do you negotiate with a polite grin for your existence as a political power, when the other side will aim for your teeth?

Strap in. This arc of justice is not too rusty yet to get moved.

Posted by Vixen Strangely at 12:18 AM

oh wow. i live in broward county and i remember the good old days when bush, whose family lived on a very exclusive island in palm beach county, and they just flat stole that damn election. rethuglicans! greedy bastards. good times watching them throw tantrums now. karma is a bitch baby