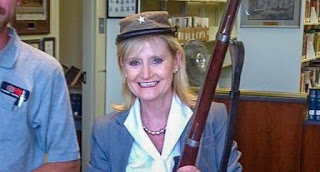 There is a part of me that wants to understand the politics of the Deep South and how it would create a Confederate-signifying politician along the lines of Senator Cindy Hyde-Smith--why it might not occur to her that strongly advocating, for example, on behalf of Confederate vets and monuments there-of, wasn't necessarily a great look.

There is another part of me that entirely gets it, having lived the last forty-six years. I am not too young to know Reagan launched his candidacy for president against a gentle evangelist of the New South in Neshoba County just this close to Philadephia, Mississippi. And he extolled "state's rights"--which I guess and assume to this day means the rights of Brian Kemp to disenfranchise tens of thousands of Georgians and invalidate some number of votes and turn people aside from easily voting because of voting machines that were not available for a value of available that means installed in an accessible voting location.

If someone was looking to capture the South on behalf of the one-time party of Lincoln, Reagan sorted out the means so to do. And Cindy Hyde-Smith, having come up in a segregated private high school (and sent her kid to one), knew exactly the footsteps to follow in: if Reagan was once a Democrat whose party had left him, she, a former Democrat, understood that the Democratic Party had also left her (as in, we would not still have an unreconstructed Confederate, I guess).

Well, Georgia still has me upset, and Florida could make anyone lose their rest, and as for Mississippi?

Goddamn! There are lines for absentee ballots, for a runoff, which is amazing to see.


Mississippi, look forward, not back.
Posted by Vixen Strangely at 2:29 AM

However, I would say, in the context of your post, that you would have to understand the high culture of the antebellum South to get a clue.

Today when Yankees think about this it's all about the abuse of legal slavery and the civil war.

If one were an outsider this would be understandable except it's like trying to understand the whole history of New York City by thinking about Tammany Hall. Sure, Tammany Hall scandal did happen. Sure, it was a criminal enterprise and did a disservice to government and to the people of New York City.

Obviously though that does not tell you anything about the history of opera, ballet, art galleries, schools of acting, incredible business and commerce, or the personalities like William James and so many others.

If I were looking at the South strictly from the point of view of the abuse of slavery I would probably think like a Yankee. However, I grew up in a place where the antebellum culture turns into the cowboy culture so I understand the abuses are a small percentage of what the culture was about. You could try reading Pat Conway or Gone With the Wind and it could help give a little understanding.

Incidentally, I was out of town for a few days. I think you're right to some extent about Trump and business. Apparently he's down to an income of about $160 before taxes. Also, he tried to suggest that his business was worth about $10 billion when in fact it was worth $3-4 billion. The value at the present is about $3.1 billion. Hie owns a portfolio of some of the most spectacular props in the world. His revenues have fallen in blue state, but increased a little in red states. This is nothing compared to Bill Gates, Warren Buffet or Jeff Bezos.

So I guess he'll have to tough it out and hope he doesn't sink down to $2 billion.