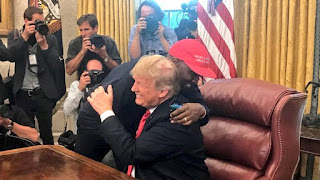 My most difficult task as a blogger in the Trump era is trying to sort out the noise from the actual reality of things, when, for a considerable part of this administration, the noise is their point. It's easy to be distracted by something as obviously eyeball-seeking as Trump's invitation of Kid Rock and Kanye West to a White House bill signing to-do that really had nothing to do with them. The bill in question ensures artists can still receive royalties from music made before 1972. Neither Kid Rock nor Kanye West were making any music before 1972, but they are vocal Trump supporters--so there they are.

Amidst the odd things rambled about in the event, one might miss that Trump, when questioned about the apparent murder of US green-card holder and Washington Post journalist Jamal Khashoggi, gave some of the weakest baby-shit answers imaginable. Well, it's a darn shame. And it didn't happen here but in Turkey. And he wasn't an actual US citizen. And we made an arms deal. This genuinely makes me wonder if Trump actually grasps that murder is bad when governments do it. He doesn't seem to--consider his admiration for the Chinese handling of the Tiananmen Square protesters. He's praised the toughness of people like Rodrigo Duterte and Kim Jong Un specifically regarding their ruthlessness. It might sound in his mind like he's being some version of macho, the same as when he threatens the press with phrases like "enemy of the people"--he's "fighting back"!

And yet, here's the weakness of his rhetorical corner: this peculiar admiration for "toughness" means he "fell in love" with the North Korean dictator who delivered Otto Warmbier back to us in a clearly brutalized state. And because of Trump's "happy talk" kind of rhetoric, he paints himself into a bit of a corner, doesn't he? If North Korea is not compliant regarding what they might have agreed to think about doing (or if, perhaps, China and Russia are not compliant in upholding any sanctions re: North Korea on their end), Trump's switch from "love" is like a confession of failure. Trump needs his list of accomplishments, after all.

It seems like, to Trump, a wee bit of extrajudicial killing for dictators is like pussy-grabbing when one is a celebrity: they just let you do it. "They" being people with no earthly observed or enforced ability to stop you. Why would he enforce what he clearly thinks is okay for Saudi Arabia to do? Aren't we already helping them do genocide in Yemen?

Which brings us back to celebrity and Kanye West. I am curious about what brought about the invitation of Trump-backing musical artists to this particular event, and wondered if, in part, the batshit signal didn't go up in response to Taylor Swift's recent endorsement of Democratic candidates and clarion call regarding the importance of voting.  It's like a form of entertainment-news poker: "I see your Swift and raise you a Yeezy."

But I worry that this is sort of like creating a spin-off of his usual brand now that his campaign-style rallies are even being ditched for low ratings on Fox News Channel. In rather the way The Celebrity Apprentice was a more interesting vehicle for the Trump reality tv brand--will we be seeing more famous(ish) Trump-supporting faces out there to sort of give him a little buzz when press is rough? Will Trump Administration press turn away from press briefings (which Sarah Huckabee Sanders seems really loathe to do, and Raj Shah is basically not likable for Sean Spicer values of "ugh") to just do weird "Love Boat" like "episodes" where Scott Baio or whoever just show up and everyone's time gets wasted because this person was in entertainment?

There is no good reason for press persons to ask Kid Rock what he thinks about anything, except for enumerating the various right reasons for starting an escort service. There is no value in psychoanalyzing Kanye West, or even studying whether his performance suggests that Get Out was a documentary. His mental health is a family issue--but his and Trump's rhetoric about race (and masculinity) is definitely and regardless, not healthy. It's window-dressing that forces us to deal with "Trump as Celebrity" when we need to look at "Trump as Accountable Elected Official".

And he is failing at accountability, transparency, swamp-draining, and more. His celebrity persona, his carefully-cultivated persona, was being the guy who said "You're fired" and made money all the time--but the reality is he's a cheat, a scam artist, and he is afraid of firing John Kelly. He can't stand up to North Korea or Saudi Arabia and has to pummel immigrants and shit-talk Democrats to fake being something.

He is a Potemkin president, all surface. But he has nothing at his core. His image is celebrity, and nothing more.

Even sadder than West's unhinged free-form ramble was Trump staring at him, admiringly, comprehending every manic twist and turn.

"Hero's journey"? West will assuredly step up to become to Trump as Homer to Odysseus, Virgil to Aeneas, Longfellow to Hiawatha. We're all fucking doomed!