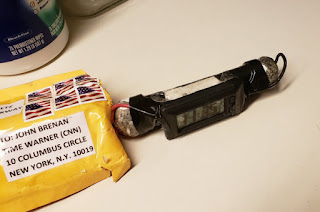 I don't have a "hot" take to make with respects to whodunnit in the mass mailing of the nastiest of grams that delivered crude but potentially functional explosive devices to CNN (well, John Brennan at CNN--which he isn't, really), the Clintons, Barack Obama, Eric Holder, Maxine Waters, etc. other than this looks like some serious domestic terrorism and I hope the fucker(s) who did it get prosecuted to the very fullest extent of the law. And that is it, because I don't think speculating further does a whole heck of a lot of good. Regardless of who originated the attack, the targets all appear to be persons critical of and in return, singled out for opprobrium by, the president. The reasons for addressing homemade murder threats to top Democrats/Trump critics can be up for a tiresome debate that becomes mooted once the actual perpetrator(s) becomes known.  Therefore, I can only iterate that the incendiary missives seem to have political intent and mean to do harm--and that this looks like definitional terrorism in my book regardless of the political signifier adopted by the actual perpetrator in the long run.

I don't boldly state more than that because I have an intense dislike for being an asshole. It might be true that the rhetoric of the current president embraces violence and singles out the same people targeted in this attack. Both people who support Trump and those that don't can see that. While it is perfectly obvious that a Trump supporter is more likely to be liable to threaten or wish or even initiate bodily harm against these particular targets, there is a nonzero likelihood that an anti-Trump person could think up such a scheme with the intent of framing right-wing activists as violent with the intent of making the political right wing look violent to offset the "leftist mob rule" rhetoric that has been au courant.

Note--I said a "nonzero likelihood", but I will also say this: thinking that a planned fake attack on popular Democrats would be good for the left in any way be an amazingly stupid idea. There is simply nothing about it that would energize the left base to any extent at all. It would only highlight the idea that leftists do stuff like protest mostly peacefully and vote, and right-wingers tote weapons and blow shit up. It actually sounds like a way to depress liberal voter turnout, to me.

I'm not even kidding about this--Dana Loesch really recently said she thought NRA members should open carry to the polls because leftists might accost them (how we'd even identify their asses if they weren't openly carrying, I don't even know). I know I always march up to armed people and start, uh, first amendmenting the bejeezus out of them and sometimes feelings are really hurt. Wow. And contra folks like Ann Coulter, right wingers have been known to blow shit up.

Egads, had she forgotten Eric Rudolph, Timothy McVeigh, and Cheryl Sullenger? And if she did, how could she have?

But of course, stupid right wing folks will say the stupid: 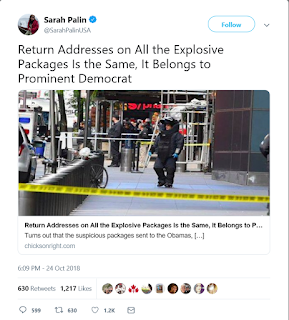 Because of course the return address on a murder package will have a valid return address and not an address that nonetheless accomplishes part of the murder-quest.

It might be obvious that a Republican can be murdery same as any human. Or that faking a murder plot could seriously backfire if it depressed turnout for, their own particular party.  But election-season makes people weird. How else to explain why an event like the South American caravan, that is an annual event more or less, is being used like it is a weird rare thing some activist moneybags somewhere had to have paid for? Even if it is entirely incongruous with things leftists in the US vote about--as in, it motivates Trumpists more than it does our crew?

Meh. I care not to litter the field with dopey takes when dopey opinions are so already thick on the ground.  But goddamn, these dumbass opinions all over the place!

Posted by Vixen Strangely at 1:44 AM