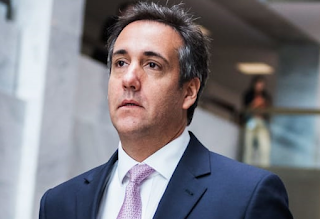 There's just something about a raid on Trump's personal attorney and the deputy national finance chairman of the RNC (or at least, he was--maybe not so much anymore) and Stormy Daniels pay-off patsy that perks me right up. It's not very usual to see a raid that goes after various documents at a president's lawyer's office, home, and the hotel room were he happens to be staying.

You just don't. I take people more experienced in these things at their word that this is a serious development that suggests Cohen has got himself into something deeper than just the Daniels pay-off situation (although that in and of itself might touch on campaign finance violations, bank fraud, bribery and intimidation if Daniel's recollection of being personally threatened bears out). I recall in Michael Wolff's Fire and Fury reading that Steve Bannon had indicated that there might be rather a large number of similar arrangements, but that still doesn't quite seem like what would call down this kind of activity.

It kind of reminds me of the raid of Paul Manafort's offices and home and whatnot. Deputy AG Rosenstein and special counsel Mueller seem to be proceeding from a pretty high confidence that there was a "there" there in pursuing connections between Manafort and Russia.  What they uncovered was sufficient to indict him for a buttload of money laundering and it looks like he was up to some damn unsavory shenanigans for the benefit of then Ukrainian President Viktor Yanukovych (which included, interestingly enough, smear campaigns against political rivals and a certain US Secretary of State). I doubt Cohen was into anything that deep, but he did arrange for a 20 minute Trump speech to be made in exchange for a $150K contribution to the Trump Foundation by a Ukrainian billionaire, right at the beginning of Trump's campaign.

Laundering contributions by foreign nationals through one's foundation in return for speeches in what is an apparent attempt to gain influence? Gosh--where have I heard of such a thing before?

Anyhow, and this is all very slap-dash, since the last damn TrumpWorld Grab-bag I've filed, Guccifer 2.0 turned out to be probably GRU and was in contact with Roger Stone and WikiLeaks seems to have been communicating with him, too, and Stone either did or didn't have foreknowledge about Wikileaks', um, leaks, maybe someone heard from George Papadapolous in a nightclub that Jeff Sessions wanted him to go after dirt on Clinton (the Papadapolous guy either needs a big operational security lecture or to start attending AA). Basically, there were a lot of people in the Trump orbit who were really all about those damn emails. None of it looks like a big old smoking gun that of course the Trump campaign was coordinating with Russian agents mind you. It looks like a pattern of just not being terribly particular where dirt on Clinton came from. And odd connections with Russians keep coming up.

Of course, we'll doubtless learn more about what this Cohen situation anon, and it does seem like this particular development has POTUS exceptionally rattled. It may be that this really does just boil down to the bizarre ethic compromise of paying off an adult film actress to keep shtum over a one-night stand, but then again, even that points to a takeaway from the Steele Dossier--that Trump could be subject to blackmail over his sexual business.

Posted by Vixen Strangely at 1:40 AM