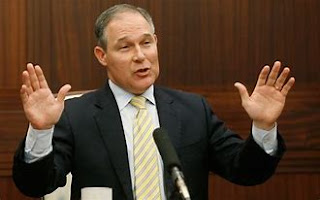 One might have expected that there was something a little weird about Pruitt when he wanted the $43k soundproof booth in his office, or when he alleged that he really needed to fly first class because people said mean things to him when he flew coach. But I really think this past few days' worth of revelations has exceeded all expectations regarding a man and his grift. The sweetheart condo rental deal made between Pruitt and the wife of a lobbyist who had projects subject to the approval of Pruitt's office is pretty dodgy once the details come into focus, and his deliberate staff manipulations look an awful lot like an abuse of power. Little details like wanting to use the sirens on his motorcade to get through traffic more quickly when he was running late, or noting that he not only had a deep discount on his Capitol Hill digs, but fell behind on paying for it, seem almost comical, but point to a truly cavalier attitude towards government service.

But what is frankly amazing is that, despite all this, Pruitt's effectiveness in dismantling the EPA's regulatory abilities outweighs what one might suppose would seem an embarrassing appearance of corruption. All in all, a touch of corruption doesn't seem to be all that new a detail in Pruitt's bio, to the extent that it becomes clear that the Trump Administration and it's admirers may feel that Pruitt's corruptibility is a feature, not a bug. What else can one make of the rumor that Trump is considering not just not firing Pruitt, but considering him as a replacement for Attorney General Jeff Sessions.

Because if a person is not merely corrupt, but almost comically so, why wouldn't someone with Trump's obvious baggage want to have him running the Department of Justice?

I could be wrong--Fridays are made for firings in TrumpWorld, after all, and many an official has found themselves getting the axe after getting the "full confidence of the President" guarantee. It's possible that the Samantha Dravin/Rob Porter leaking angle will eventually do Pruitt in in a way that the misuse of taxpayer funds has not. But seeing Senators Cruz and Paul come to Pruitt's defense and blame his scandals on the media makes me wonder if we might be about to see an experiment in just seeing if this can be "weathered out".

This is pretty terrible--the guy definitely seems shady as hell and should be out! But if Trump starts tossing every shady person working for him...who is he going to have left?
Posted by Vixen Strangely at 12:42 AM

He doesn't stand for employees that make him look bad (worse?), and he simply won't countenance a member of his administration getting more press than he does, or looking like he's somehow more important.

But this whole thing is a smash and grab. The clock's running on the whole crime family, so everybody's out to get what they can before the party's over...