This is Not your Father-in-Law's TrumpWorld Grab-Bag 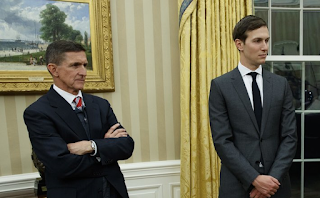 As you might have surmised, this edition of the TrumpWorld Grab-Bag is going to feature pretty heavily on Jared Kushner, who just had his security clearance downgraded, which seems great, although there is a pretty big issue with his ever having had one in the first place. Leaving aside the obvious problem of nepotism, Kushner is crazily in debt, his family has shown a willingness to use his position to get mad unethical, and, as was revealed today, a pattern of financial insecurity and poor, naïve decision-making has made foreign countries decide he is a super great halfwit to work with.  This was kind of a no-brainer--Kushner should not have high security access because his position is really insecure.

It's also probably a no-brainer to suppose that this means he either can't do his presumed job (which is, last I checked, all the foreign policy things we're supposed to have a State Department for) or, Daddy Trump and Ivanka are going to let him crib from their notes. This is a situation of such abominable stupidity it could only be happening in the Trump White House.

But in the world of "Jared can't catch a break", he's also facing a Hatch Act violation for talking up President Trump's 2020 campaign manager, Brad Parscale, while using his official White House title. Kushner, of course, brought Parscale on to the 2016 campaign and worked closely with him, so he has a good idea about the quality of his work-product from the digital end of the campaign, but even that is darn problematic. Parscale went from being pretty much no one in politics, to being a weird 2016 success story, but the funny thing is, he's tied to Cambridge Analytica, which is tied to Steve Bannon, Mike Flynn and, obviously, the Russia investigation.  Parscale has already had a chat with Congress, and is probably going to get another one with Robert Mueller and friends. (Don't sweat, pets, there's other hang-ups this cat likely has.)

Among the things that are kind of alarming about Parscale's "genius" strategy is that it counted on using social media as a voter suppression tactic for targeted demographics. And oh! Hey! Far out! Neat! That was exactly the game the Russia interference was playing at, the Mueller has already indicted folks for. But really, who knows just how Russian assets intersected with the Trump campaign--yet?

You know who might or might not know? Roger Stone. Apparently, it turns out he was all up in the WikiLeaks DMs (even though he tried to front like he wasn't and WikiLeaks tried to front like he wasn't) getting told to please stop telling people he was in touch with WikiLeaks. These reads are a little funky. You know who's digital back and forth I might like to know about, though--Assange and Sean Hannity. I know. This might just be a fanfic "ship" I have in my head. Anyhow, Sean Hannity recently said something kind of funny--that he was actively involved in the Trump campaign, and he never heard of George Papadopoulos.  "Actively involved"? Wow. This was a journalistic integrity half-minute with Sean Hannity.

I can't assess whether Hannity ever crossed paths with George Papadopoulos, but Joseph Mifsud, the professor that dangled Hillary Clinton "dirt" obtained by Russia to him, is missing. Is he the victim of foul play, or just ducking child support? I can't even pretend I know for sure, but if he's alive, I'm sure he has stories.

But as it must, this TrumpWorld Grab-Bag has to circle back around to Trump himself. Jared Kushner wasn't the only person whose dodgy background interfered with performance of his job--four Commerce employees just got the boot for clearance issues. There's definitely still "vetting" issues. But the poor vetting might not even be as bad as the failure of this Administration to address the Russian election hacking to any real degree. NSA Chief, Admiral Mike Rogers advised that he had not been given any order about disrupting the ongoing Russian plot. That is not good, because we know that Russia will try to affect the 2018 midterms.  We've also recently found out that the election-related systems of seven states were breached by Russian hacking in 2016.

And the GOP-lead Congress doesn't seem arsed to do much about any of it, either. (If anything, they still want to make our election systems less secure.) But if Congress doesn't seem interested in things like seeing if Trump is financially compromised due to his foreign indebtedness (which is, rather like his son-in-law's a pretty big deal, whatever Rep. Conaway thinks), Robert Mueller is, as always, on that case.
Posted by Vixen Strangely at 1:02 AM