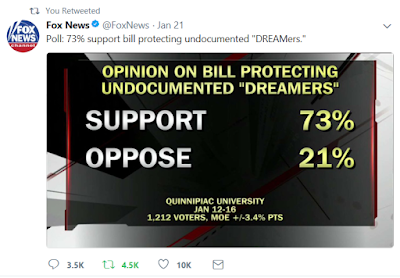 Consider me in the "not a cave" camp regarding the vote to end the government shutdown in exchange for six years of CHIP funding. a promise for a DACA debate, and the possibility of another shutdown.  The deal wasn't perfect--of course settling the situation of the Dreamers sooner rather than later would be better as the lives of hundreds of thousands are in the balance.  But Sen. McConnell already gave us a clue that that was not the binary choice Dems (and a handful of Republicans) were actually going to get. In the meanwhile, CHIP remained unfunded, and Sen. McConnell had blocked a bid to keep the military and other federal workers paid. Hostages were piling up.

It should be clear that, just as the party that has neither the majority in the House and Senate nor the Presidency is unlikely to be the main culprit in causing a government shutdown in the first place, that the party that does have those advantages is also responsible for determining what gets voted on. It should be obvious, but there is no counting on the media not to report this as a "both sides" problem. The framing coming from the White House and from Majority Leader McConnell presented the most negative light: Those liberals were ready to support illegal immigrants over American citizens. And sure--that's crap. Kids brought here when they were minors had no control over coming here, and are as American as anybody, except for the paperwork. But given enough time, and without the ability to easily reframe that debate, Dems were facing losing support for the trying to do what not only seems right but is actually popular.

The thing of it is, while DACA is popular, government shutdowns are not. So, I don't see this vote as a "cave" so much as choosing a different time and battlefield. Dems responsibly voted to end the shutdown. And if Mitch McConnell is a man of his word, he will allow a debate on DACA. He said so.

Now, that means an awful lot rides on the good word of Mitch McConnell. Senate colleague Bob Corker was optimistic:


Addressing questions about whether McConnell would stick to his word on DACA, Republican Sen. Bob Corker said, “He’s going to do it. He said he’s going to do it. I’ve never gotten any sense that he’s not going to do it."
Corker added that it would be an “affront” to a larger number of his colleagues if McConnell didn't keep his promise.

(Wouldn't it just be an affront, now?) But Senate Majority Leader Mitch McConnell has been luxuriating in his effrontery for some time, now. There was that thing about denying President Obama a hearing on his SCOTUS pick. There was giving assurances to Senator Collins and Senator Flake  for votes over things that did not come to pass. But what McConnell promised just now was public and maybe just a little harder to go back on. And in three weeks, if he was not a man of his word, he deserves to get well and truly dragged for his bullshit.

There's no guarantee that, even if a debate takes place, an acceptable bill will get passed by the House and Senate, what with the Freedom Caucus and all that. Or that a bill gets signed by President Trump, given who his particular base is, and all that. (There were no assurances this time around either, which makes me wonder what people think would have happened this go-around.) Our best option on a good DACA resolution would involve neither a Republican Senate, nor racist-ass Trump in the White House--and that takes elections. But the next time, the debate about immigration can't hide behind insurance coverage for kids. It rests on McConnell having the debate, and the spotlight being on what Republicans do with that debate.  All in an election year.
Posted by Vixen Strangely at 12:15 AM