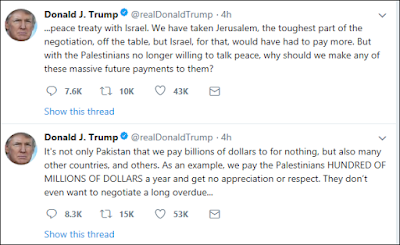 I think from a foreign policy standpoint, this is really not helpful--but then he gets almost too, too, entirely "Donald Trump" even for Twitter: 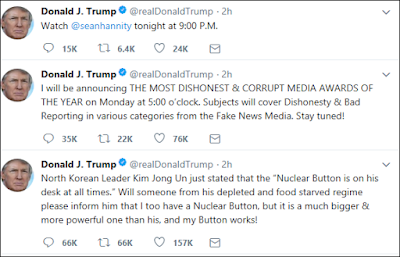 Trump's "button" is so bigger than Kim Jong Un's, the Fake News Awards will be Monday (next week? so soon?) at "5:00 o'clock" (has he forgotten how to tell time?) and p.s., also watch Fox News. Today was like a double LP of Trump's greatest Twitter hits.

This is not the behavior of a responsible adult, let alone a president. He is a danger to himself and others. And the GOP leadership supports him.

UPDATE: He deleted the Tweet about Sean Hannity, but probably because he's not supposed to be promoting television shows as president or something like that, and not from the shame of watching Hannity.
Posted by Vixen Strangely at 10:14 PM

Ok ....we can all say it now with no hesitation...THIS mother fucker is crazy!