This TrumpWorld Grab-Bag Has a Good Memory 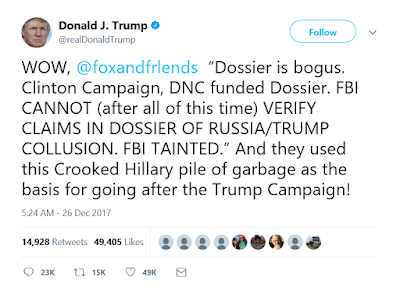 There is a kind of running joke that the President appears to be performing with respects to his Twitter output--he most certainly doesn't spend every free hour watching cable news--he says, except that whenever he's Tweeting, you can match up what he has to say with the last thing he saw on cable news. Sadly, he watches "Fox and Friends" which is basically like a DIY digital lobotomy. He is literally the boss of the executive branch of the US government, and he gets his news from an idiotic morning chat show. It can't hardly get no stupider than that, folks!

But the funny old thing is, Trump seems to have used his excess Twitter characters (he was far better at 140) to demonstrate he either does not understand the timeline of his own Russia scandal, or is deliberately trying to rewrite history. That might fly with some of his supporters, who have also undergone the cerebral icepick-editing process that is Fox News on an endless loop, but for people who have been keeping a record of what's up, there is a pool of exactly no one who would think that Trump's connections with Russia are only being investigated due to the Steele Dossier.

Trump's outspoken admiration for Putin predated the dossier, as does Putin's own expression of admiration for Trump. Despite Trump's vehement claims that there was no longstanding interest or connection on his part with doing business in Russia, we know this simply is not true.  Trump's business ties kicked off Steele's entrée into the dossier investigation proper, formerly backed by a "Never-Trump" Republican.   (That it was later picked up by the DNC is really of no consequence--because did anyone at all hear about the Steele Dossier before the election? Hillary Clinton might have alleged that Trump was Putin's puppet, but, and this is despite the apparent tag-race with WikiLeaks and Trump's own jaw-dropping public request that Russia hack/drop some of Clinton's emails, her details seemed in line with news reporting.)

That the DNC and Podesta were hacked was known. That it was Russia was suspected and basically confirmed. That it turned out that many people associated with the Trump campaign met with Russian operatives is undeniable at this point. Did the FBI (Those wacky liberal partisans!) jump on the Steele dossier all at once?

No, not according to Steele. He was concerned that the FBI were dragging their feet on his raw intelligence, which he knew could very well lead to something actionable--and you know what?

It still could. And at least on the issue of stopping Russia from continuing to try our political system on for size, it would be really great if the Trump Administration (no longer a campaign, mind you) felt like being arsed about the security of our democracy. In concert with Trump, identified Russian active measures seem to indicate they too, want to undermine the Mueller investigation.

And here's the rub--it seems to me that while some authoritarian jackasses want to purge the FBI because they believe that Trump is somehow being picked on (although I submit, if the system was truly rigged against him, Trump would not now be in office) it sure does seem to me that if Trump was as innocent as his original protestations of having nothing to do with Russia at all (as, I believe, his son-in-law Jared Kushner and his Attorney General Jeff Sessions each erroneously, at one time claimed, and were found to be false) he would appreciate the opportunity to be vindicated.

And yet, as the investigation has lead to indictments and plea deals and serious charges galore thus far, Trump is hardly in a place to pretend that the investigation is a "Crooked Hillary pile of garbage" at all. It really looks like his team of "the best people" was a very bad team, and he is trying to pre-emptively disqualify the refs for fear of what might be disclosed. This is just like his disparagement of Judge Curiel because he was Latinx.

There is no good reason to go after dedicated career professionals in any law enforcement or intelligence branch for simply investigating a political figure for actually credible criminal claims. And Zandar makes the very good point that a purge of our experienced career G-men and women is exactly what would make Vlad Putin a very happy man.
Posted by Vixen Strangely at 12:38 AM

It's not as though the FBI had a tip in May, 2016, about a "coffee boy" bragging to a "connected" Russian about dirt the Trump campaign had found about Hillary in some stolen e-mails,is it? Oh, wait, it is!