Trump Did Not Have a Great Day 2 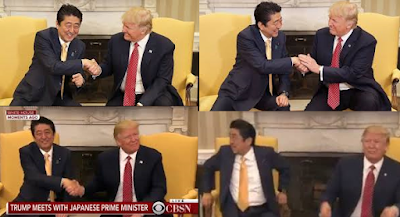 Any given day in the Trump Presidency might be indicative of some absolute unprepared amateur-hour crack-pottery, but some days just stand out--and this is another one of those days.

It started out with Trump Tweeting about a news story that was in progress regarding his contact with China--he flagged an earlier story that indicated when he last called the Chinese government, which was updated at some point after his most recent call, which left him linking to a story in a Tweet about his having just now called China that made it look like he actually was not able to read.

He also was quick like a bunny in Tweeting about Lawfareblog.com regarding a quote he heard on the very-low rated failing Morning Joe show he supposedly never watches, which is not actually favorable to his immigration executive order. This also sort of made it look like he either doesn't read (or can't), or just responded via Twitter to a thing he saw on tv, without any critical thought.

This is pretty non-terrific. But he did have what could have been a saving grace--a visit from Japanese Prime Minister Shinzo Abe, who is an ally of the US, and how could Trump screw that up--

Except by giving one of his weird dominance-display handshakes to someone whose culture isn't even about handshakes, and getting his name wrong because foreign policy-fail. 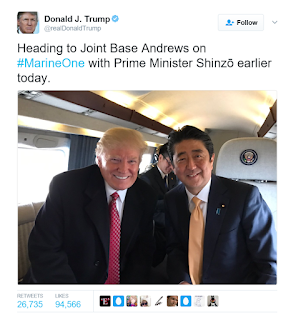 But let's talk about something a little closer to home--like Trump's National Security Advisor who apparently spoke to Russia to reassure them, before Trump was even sworn in, that the sanctions regarding the apparent election-hacking were only temporary.

This scenario makes a liar out of VP Mike Pence, who either was misled by Flynn or is covering up a little. But what is amazing is that this little bit of who said what to who when and who knew it and when is going on while law enforcement is finding more credibility in the Russian dossier. This once again reminds us that there was a lot of fishiness about the circumstances of what kind of stories were being pushed in various media during the election--to Trump's favor.

But let's not suppose that Trump is any more aware of that than he is of the Flynn story (he says). After all, he has his mind firmly fixed on the real electoral threat of busloads of Massholes invading New Hampshire to vote illegally.  (I love you, Massachusetts, and wouldn't call you "Massholes" myself, but that's what alleged Pats fan Trump is saying, which is wicked two-faced, right?)

Anyhow, this is another very not-good day in Trumplandia.
Posted by Vixen Strangely at 2:50 AM

Hi Vixen,
about 2,000 years ago the venerable Emperor Hanmingdi in his wisdom recognized and formed a new alliance with Buddhism in China. This has been celebrated ever since with the joyous and serene Lantern Festival. And now President Trump demonstrates his approval and congratulations in respect to the 15th day of the new lunar year.

In the month of the October Moon General Flynn went to Japan and surprised them with his unwavering support for Japan, including support for the Japanese side in the dispute with China over the Senkaku islands. Around this time President Trump made forceful statements against China building an artificial island with airstrips. For a long time there has been brinkmanship between the US and China in the South China Sea. I cannot go into this except to suggest that you think 'aircraft carriers.' Needless to say, an artificially developed site for fueling warplanes is an enormous boon for China with its regional ambitions.

There was some mild saber rattling between President Trump and the Chinese over the obvious power play and support given to Japan and the repudiation of China's artificially constructed airstrip.

When President Trump began to speak to China forcefully, initially China bristled but then began to back down.

President Trump timed his appreciation for the Lantern Festival so that China's effusive acknowledgment of the letter would occur before Prime Minister Shinzo Abe arrived in the US.

This kind of behind the scenes initiative takes place constantly, and our political discussions in the US have devolved to such an extent that people mostly argue about publicized current events. Behind the scenes though there is constant activity and President Trump is showing his mastery of negotiation.

Despite all of the protestations, mainstream America is very pleased with President Trump, and they have every reason to be.

This type of contact with the other side has worked so well for the GOP in the past, they just can't give it up. Dirty and low, but that just adds to the attraction for them.