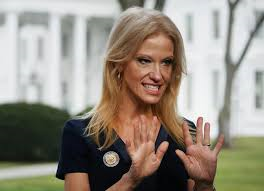 On Sunday, Kellyanne Conway tried to cover up for Sean Spicer's peculiarly lying and hostile beration of the assembled media for reporting a verifiable thing--that the crowd for Donald Trump's inauguration was a bit thin--by asserting that he was providing "alternative facts."

"Alternative facts", Chuck Todd was forced to explain, would be "falsehoods". Because facts are things that are true. The alternative to them is things that are not. He did not use the more accusatory term "lie", although if Trump spin keeps trying to soulcycle their way through reality, they might discover that indoor and outdoor spinning ain't the same animal and that no matter how tough an artificial regime is, it isn't the dirt bike trail of actual politics--lying might still be, new political climate or not, an "eat-dirt" wipe-out event where policy rubber meets the human road. (Damn. That extended metaphor. Fuck it. I'm keeping it. Tom Friedman eat your heart out.)

So give it another day, and WH Press Secretary Sean Spicer is back out here "disagreeing with facts".

Yep. Still on about crowd size for some bizarre reason. Which sort of makes me wonder--how is this the thing this poor meaty bloke is forced to make his stand on? Why the insistence on crowd size? It's fucked up! Let's face it--I watched a video after the fact of the inauguration speech because I was at work that day. That was not an endorsement. It was being an interested citizen. Watching the inauguration via any means other than getting your ass down there was the "RT doesn't equal endorsement" of political activity.

But here's another thing that came up--there seems to have been a cadre of Trump staff that applauded at Trump's Saturday showing at Langley. The ones that applauded were his peeps.  This shouldn't surprise--he had staffers applaud at his many file-foldered folderol a couple weeks back. Hell, we know via FEC disclosures that Trump paid (well actually he didn't...) for part of his 2015 presidential announcement audience.

This size thing is starting to look like really weird overcompensation. For what--business failures? Family trouble? Simply being small ("of spirit" she added, partially facetiously) ? This picture of his first few days is revelatory.

But Trump was adamant, aides said. Over the objections of his aides and advisers — who urged him to focus on policy and the broader goals of his presidency — the new president issued a decree: He wanted a fiery public response, and he wanted it to come from his press secretary.

Spicer’s resulting statement — delivered in an extended shout and brimming with falsehoods — underscores the extent to which the turbulence and competing factions that were a hallmark of Trump’s campaign have been transported to the White House.


But no less pathetically alarming is that than this portrait of the POTUS as a raw politico assembled with congressional figures, still harping on the utterly untrue notion that somehow, he lost the popular vote only because of hordes of undocumented foreigners being able to improbably vote.

Somehow, many congress-critters heard that, but didn't think it was weird enough to be really alarmed? Didn't hear the cry of wounded ego? Didn't understand that this is why Trump is going to lie to them a lot?

But just so you, my readers understand--Trump is not normal. He needs an uncontested win, and can't let even a perceived loss go. He feels less than perfection is a slight. He hates to be disrespected.

I've never seen someone just reveal their soft white underbelly like that. Is it a trap? Or can we just really tease him until he develops an eating disorder?  (This is really mean and hypothetical and I once had disordered eating for a minute, so--don't hate me for saying it.) But if a set-back like crowd size is going to make him crackers for days, this is a problem. And if he needs a booster club to cheer him on that's a weird security blanket for a grown-ass man. So I don't even know if I want to call this "propaganda" , or "overcompensation" to keep up with his decompensating over how much work presidenting is going to be. Like a dog that caught a car--does he know what is he even going to do? Or like a spoiled brat who was applauded over hitting the potty way after it was no longer unexpected--does he just need unalloyed cheering to function?