About the Maddening Crowds 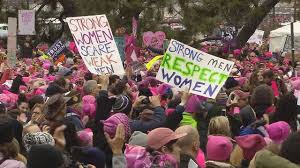 The day after Donald Trump was sworn in as the United States' 45th president, a rather astonishing thing happened--an extraordinary, mostly woman-centered, nonviolent protest, occurring globally (even in Antarctica!) took form. Numbering in the millions, this is one of the largest demonstrations ever--maybe it calls to mind some of the anti-Iraq war protests circa 2002-2003? They were pretty global and well-attended--but no. This was a unique experience of sisterhood and brotherhood, intersectional support for human rights and a call-out for dignity and against (really!) President Trump's lack of concern for all of the same.

Let this lovely backdrop of unity and positivity highlight our Trump era contrast: the just-yesterday sworn-in President made a visit to Langley, ostensibly to make things less awkward between himself and the intelligence community. I don't think it worked. Standing in front of a wall commemorating the sacrifices of CIA line officers to bitch about whether you're getting good press is possibly not a good look. It's also probably pretty awkward to be gung-ho about torture and indicate a willingness to go back to Iraq to take the oil of another country as if we didn't have people still serving there when Iraqis might take those statements some kind of way, but I am probably confused about whether the far larger issue that should be consuming us all is his inauguration's crowd-size.

No, really. This was such a big thing in Trumplandia that WH press secretary Sean "The Forehead" Spicer was called out to pretty much lie about whether the Trump inauguration, was, too, the biggest and best inauguration ever. But it really wasn't. And really, everyone knows it isn't necessarily the crowd-size, but what you do with it anyway, right? (Although if you give a short but brutal, and it turns out, Steve Bannon-penned speech after bragging about writing it all your damn self, maybe you are a bit of a prat.) But that isn't good enough, Spicer strongly suggested. The journalists are just unfairly size-queening the incoming Administration.

Whatevs, says I. Maybe there is some kind of partisan "dick-measuring" to be had between whether Obama or Trump had the bigger inauguration package. But neither of them had quite the support that was shown today for the pussies.

Who cares how big the crowd was? Does the Administration really want to go to bat over THIS?

Seriously. There are going to be things this Administration needs to lie about, like health care, Russia, torture, the budget, the wall, etc. Don't waste what credibility you have on crowd size.

Salutations, Vivacious. Yeah, it was sort of passion in search of a purpose, as much like the harmonic convergence as a political statement.

The existentialists tell us that man or woman is not here to seek pleasure or escape from pain, but to see a meaning in his life.

I have been heavily in the meaning business for a lot of years,and I have learned something that most people don't know. After a long time of engaging people in search of meaning I finally realized that the majority do not understand that meaning only comes after many years of serious effort, whether it be magical, mystical, philosophical, religious, or secular.

Now of course people with strong religious convictions are born into meaning, and it may stay with them for a lifetime. A lot of women secure meaning when they have a spouse, children, and grandchildren. Some people find meaning in their careers. So my statement about the efforts required to have meaning are not ubiquitous.

A great many people are not born into meaning and do not slide into it, and I have discovered that they feel that meaning is something that is simply supposed to overtake one at a certain point. Like the ability of the body to have movement or the ability of the mind to cogitate, meaning is just free and comes with the territory.

Simply not true. I have a lot of meaning in my life, and I have been working on it even before the days when I met Bob.

So people want to fill this uncomfortable gap where meaning should preside and yet it doesn't. And so for a lot of them the world provides fraudulent, cheap substitutes like political marches, Aquarian Age festivals, choosing a side and endlessly griping about the other side.

After the movie Animal House a lot of people felt that if they weren't untethered and weren't wild and crazy, they weren't having the true college experience. The high cost of education drove a stake through that one.

A lot of people look back at the 60s and feel that if they are not gathering together in marches even with only vague purposes they are not enjoying the kind of meaning that they imagine 60s people had. Ergo you can account for a lot of these people who flock to the public displays trying to capture a cheap substitute for meaning that is hard actually to obtain.

In Timothy Leary's autobiography Flashback he said that the student movement died because they were trying to emulate Europe's eastern bloc student movements, but in the US they already enjoyed freedom.

If one hasn't bumped into meaning in the course of life one can still obtain it, but it will require a lot of effort to come to a place of profound understanding. It is not freely given, and it has nothing to do with action aimed at other people or external changes, necessary though they sometimes may be. The actual direction of meaning is within.

Stumbling through the "meaning" question for awhile, I it started to occur to me that I could settle for purpose--did I think what I was doing mattered to myself and others? Did I speak up for a cause I thought was important? Did I help out with a whip 'round when someone was out of pocket and up against it? I try to think in terms of separating the idea of "meaning", as in feelings or actions pertaining to a higher principle, as something separate from what I would term "signifying"--actions that signal tribal alliances and are correct for one's attitudes, but which might not accomplish very much. Some protests can fit within this scope, and being a Generation X cynic, I look askance at "feel-good" slacktivism.

While it might be difficult to attach meaning to the protest in and of itself, because different marchers had their different agendas--some protesting Trump policies, some for human rights, some for reproductive rights and so on, I think there is purpose in it. Part of the purpose is to "represent": Women and allies of feminism exist. Feminism is intersectional and many policies of government affect women and families. Our elected leaders need to know we are out here and our voices matter. Part of it is to bond and make connections: in a democracy, numbers matter, but those numbers of people need to be organized and need "purpose". They need to feel energized to join a committee, start a fund, run for office and get involved, and a gathering like this can be the start of just that kind of will. Also--there is a need to see that one is not alone--the strength in being part of a movement sometimes lies in realizing that there is more than just yourself, and seeing the faces, the signs, hearing shared stories, renews that sense of purpose. You know, Clinton's loss struck many of her supporters pretty hard...but we are still here. There isn't any clear direction for everyone to go--

But where "we" (for a value of "we" that means people who tuned in, turned on, and decided they could afford to lean in) go from here will be with a purpose. Which might be in any number of directions, depending upon where the genuine movement forms. And that might've been a little bit of what was needed anyway--more of a sense of purpose. It's possible many were there to start with to "signify". Hopefully, they finished feeling like they needed to move forward with practical work. And some. of course, were doing "the work" of organizing, educating, and supporting causes that were meaningful to them all along.