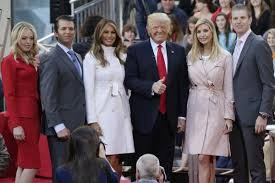 Sometimes I joke about how I see GOP ethics: "Conflict of interest? If I only act in my own self-interest, where is the conflict?" But I suppose this perverse view of ethical (non)righteousness has been almost cartoonishly fulfilled by the Trump family. To be sure, Donald Trump himself has a whole lot of conflicts of interest.  Some of it, particularly relating to his debts, might even make him a little obliged to foreign influence.  But what I find extra-funny is how open the grift has been thus far--I mean. leaving alone what kinds of contacts they make in secret,  (Ivanka stays just out of frame, sometimes, but not always. Smart girl.)

But what can one say about auctioning off time with Ivanka, or a big game hunt with her brothers?

I can not help but notice that the proceeds from the latter are to be going to conservation efforts--is that anything like wetlands reclamation? You know, like what goes on with swamps? Because I suppose the Trump kinder could label one of their various enterprises "wetlands reclamation", and turn around self-enriched for a busy day of swamp drainage.
Posted by Vixen Strangely at 12:34 AM