So, What Was Director Comey Even Doing Here? 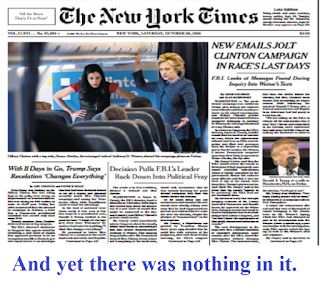 It feels a little out of place to still be aggrieved over what is now a fait accompli, but seeing that the warrant to investigate emails found on a device owned by Anthony Weiner in connection with the Clinton email investigation doesn't seem to have had any probable cause still, well, aggravates. It seems correct to me that James Comey should explain his thinking here a bit further.

Will it change anything? You can't retroactively undo whatever was done (it's kind of hard to even determine how big an effect the Comey emails to-do had overall). But there are some things I think I'd like cleared up--for one thing, former Mayor Giuliani's bragging about what he knew and from whom he knew it still bothers me. And of course, the difference in how the email investigation was handled and how the Russian hack investigation was handled--both by the FBI and the media covering the investigations--that grates.

I don't think "getting over it" is actually the healthy response here, at all.
Posted by Vixen Strangely at 9:02 AM

I'm not fan of Secretary Clinton at all and I think she ran a rather poor campaign.

However, I agree: For some reason, the Weiner laptop was an important enough story for Comey to bring up 10 days before the election, but the Russian hacking and election influence wasn't?