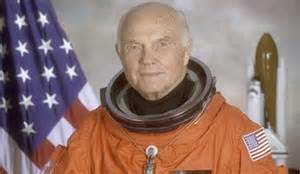 The legacy of John Glenn as a space pioneer is a story about 20th century American optimism and courage. Being the first US astronaut to orbit the Earth was no small undertaking. Proceeding from that great event to a career of public service and an eventual re-entry to space in 1998, he showed a constant drive to do important things.

This year, 2016, has been discussed as having been marked with passages of many greats. In some ways, to me, it feels like a cutting of ties to the current of the 20th century, to make this 21st century whatever it needs to become. But I hope the future continues to show such examples of "the right stuff", the sureness and boldness to look to new frontiers, and the commitment to providing service to others as a form of not just patriotism, but humanity.

John Glenn had an astonishing life--most worthy of celebration at its completion.

Posted by Vixen Strangely at 11:30 PM