If It Was About a Pipeline *You* Didn't Want? 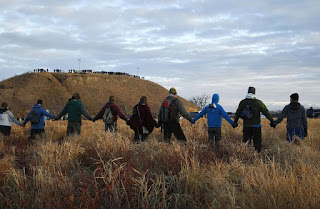 I guess the thing that strikes me as ridiculous about the conflict with the water-protectors who protested against the Dakota Pipeline which was just denied access is that these people were basically talking about what should be allowed in their own backyards. Maybe Speaker of the House Paul Ryan thinks it is a shame that they wanted to keep access to clean water and not to have the pipeline run through land their ancestors were buried in. Maybe, even after his share in the pipeline is sold, Donald Trump still feels that way, too.

But for now, the rights of local people are being respected. And that is, I would think, a good thing. And I don't really think government should muscle in and override their rights, any more than they should take away their right to protest or physically abuse them while they exercise that right. Some people think differently. But I would want them to think about how they would feel about the water their kids drink, or how they would feel about a pipeline running through their parents' graveyard.

It just isn't that more complicated than that. It's about a time and a place, and how these people said this isn't the time and place for this pipeline, right here. It isn't about weirdly hating on energy or business or wanting some special right. It was about their location. Energy companies don't have more of a right to a place because of money. People have rights and among them, the right to petition their government for redress of grievances. And if you find that problematic, you go consult with the founding fathers. See where they are buried, and consider whether a pipeline needs to run through their graves and how you would feel about that.
Posted by Vixen Strangely at 1:32 AM

Really? A full-throated defense of NIMBYism? I'm surprised - to me, that was the worst aspect of the whole protest. They were FINE with an oil pipeline as long as it went across somebody elses property. When I was more active in the recovery community, I used to see it all the time. EVERYBODY wanted more in-patient detox and recovery beds, but EVERY time we tried to buy a place the whole neighborhood exploded - "We don't want those addicts and criminals HERE!!"

If every NIMBY protest succeeded, we would never get roads, bridges, power plants, electric grid - it's a lousy way to decide how to build infrastructure...

The proposed pipeline was already rerouted away from a river crossing north of Bismarck--part of the claims being made was that the new route was just trading problems with water supplying that town with possible problems with the Standing Rock Sioux's water supply. So I might be giving more of an argument against selective NIMBY-ism where some people's backyards are more valued than others.

But from an environmental standpoint, I'm just for being a pest about pipelines in the first place. It's really more about fossil fuel infrastructure itself for me.