When You Feel Anger and Despair 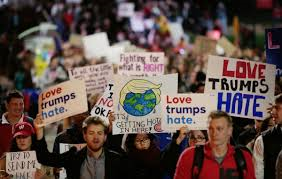 There have been anti-Trump protests across the country, and I get what they are trying to say: This is not the president they wanted. This isn't the person who will make them feel safe, and this is not the person who they feel will competently navigate the broad social, political, and science-related issues that we need a president to do.  They feel like the Trump Administration, as it is already beginning to take form, is dangerous and bigoted against swaths of the American landscape and will do so much harm.

And I agree. I've been talking about this on this blog for some time--this is not a good path for a diverse and civil society. You can knock down some claims about the wave of racist, anti-immigrant and specifically anti-Muslim acts, but I think the totality of the reports creates a picture that points to a bit more going on than some folks just dramatically performing a kind of racial Munchausen's Syndrome--there are people who have taken this election to actually be a referendum on whether or not they can stop being a shy resentful caterpillar, and can now be the blatant racist or homophobic butterfly they always wanted to be.

The result of knowing this hate is real? For one thing, suicide hotline activity went way up. People aren't making these calls for shits and grins--they are hurting, and thinking they don't want this reality. And they think about not living in it.

And that sucks, and I hope as a society we can reject that kind of hatred that fosters despair, and wherever possible, show solidarity with the marginalized who belong here and are valued and should not be disrespected or made to feel helpless, alone, or like this is the end. Here's me feeling my privilege--if I see something, you bet I'm going to say something, and we will just see if an educated middle-aged white lady can take up space for the people I love by slinging my identity in the face of hate--What language are you going to use, son?  What society do you want to live in, my brother? I haven't gotten to this stage of forty-ish feminist battle-axedness without learning how to stare down an asshole, and I will. I take up space, and believe me, the space I take up is huge. Big league. (For the benefit of Ann Coulter: And you are welcome. I'd take up space for you if I thought you stood for a damn thing worth me, my fat space, and I.)

I have anger, too. Paradoxically, I feel anger against people who look just like me and have my lived experiences, and just couldn't get it up to vote for Hillary Clinton. They "couldn't bring themselves to vote for her". Seriously? They couldn't bring themselves to face her baggage or consider her actual policies versus an actual white supremacist endorsed by the Klan? Seriously? They could have brought themselves to vote for her, and a friend, and an elderly relative--but chose not to. This guy said Mexicans were rapists--he isn't talking, when he speaks about immigrants, as if some are good and some not. He is using loaded language to smear them all. He selected a running mate who is virulently anti-gay. He suggested that women who choose abortion should be punished, and selected a running mate who had a woman who miscarried jailed. Where is the thing Hillary Clinton ever did, that is the equal to the enormity of what a Trump presidency portends? He is in favor of torture, FFS! He is planning to do actual war crimes. Because he just doesn't understand why anyone shouldn't.

I feel the anger, too. I had even a little despair, because the results of this campaign told me a lot about who votes and why and I am so fucking mad about the senseless shits who can't even schlep out to vote, ok? For the love of anything--but especially the planet you live on, read a fucking newspaper, figure out how to register and for most of you where voter suppression isn't a big thing, do that accessible to the halls of power thing, doofuses! Also--let's get really more pissed than we already are about voter suppression, you guys. Because what went down in Wisconsin or North Carolina or wherever things turned on a hair-thin margin, that might have been made up by people turned away from voting by not having adequate credentials (despite being really legitimate voters) or not having the time to stand and do the necessary? Made a terrible difference.

If you are feeling anger and despair--I am here with you. I am mad as hell and have been close to crying at times for the reality my LGBTQA and immigrant and POC and Muslim friends have faced with this election for themselves and their families. But I will stay here. I will stay here for you and me and people I don't even know yet. And we together are a wall against the stupid. Let's fight the stupid together and make sure it doesn't win. And hate will have no dominion.

We will be stronger together. It's the only way we can.
Posted by Vixen Strangely at 12:34 AM

I'll cry for a while longer...
But during that time and afterwards, I'll tell all of the non-deplorables that I'm WITH THEM, and will there WITH and FOR THEM!
They are more my brothers, sisters, friends and family, than even some members of my family!

And I will go back to doing what I've for most - if not all - of my adult life:
Fight the fucking powerful and rich people, who live to oppress others who are different and/or weaker than them, and who are not as well connected.

We have to fight as never before!

Non-violenty, of course.
Unless t-RUMP's bigoted thug and goon followers get violent first - also, of course.

I'll turn the other cheek when it comes to me.
But when it comes to other people who are or even feel threatened, I know how to handle the people doing the threatening:
Defend the ones being threatened!
Did I mention that, though I'm 58 and disabled, I pretty big, and I still remember some tricks from my HS wrestling years, and many years of being a bartender and bouncer in NYC'c Lower East Side, "Alphabet Jungle," and Hell's Kitchen - during the "fun" years in the late-70's and 80's.
I can still defend myself. And others.

Oh, and during "Baby Doc" Bush's years, I wasn't just a participant, but a lead organizer of anti/war/torture/rendition efforts - in Fayetteville, NC, the home of Fort Bragg. I've had my share of death threats, so I don't scare quicky or easily.

We can't go quietly into the dark night that will be t-RUMP's ill-gotten and unearned presidency. At leats I wont.'

I hear you, Victor. I am not as strong as I used to be, but I am as energized as I ever was. I have privilege, but it is going to be thin this time around. But I feel like more marginalized people have recognition for their rights, and that once they are threatened, people will awake from this dream they have that Trump and Co. don't mean the half of what he promised. But when the dreamers awake? When the promises aren't gold-plated, but turn arms green? When there is more oppression against protestors and press and all that? When it doesn't come up roses? When we have a military industrial billionaire's platform that still leaves soldiers and veterans in the shit? Then people who fought once or ever for rights will want a piece out of this "goldbrick". We need people supporting Planned Parenthood, ACLU, the mainstream media, with their subscriptions and donations, left politicians with donations and word of mouth, and out in the streets reminding folks that an active left is not laying down. We need to stand in the gap when loudmouths snatch hijabs and bully gays. We need to be there, visibly, physically, meaningfully--and demand our Democratic representatives do that much and more! We need to listen to assault victims and stand for their rights.

There is a lot we can do. There sure is.