Triumph of the Swill 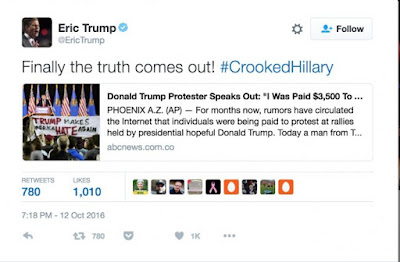 In a word--maybe! Per an analysis by Buzzfeed, in the final months of the election, fake news dissemination on social media eclipsed news from legitimate news organizations. From the graphic above, which is a screen-cap from Eric Trump's Twitter, you can see he Tweeted a link to a fake story--and so did Corey Lewandowski and Trump superfan Ann Coulter.  It's a little puzzling to me to say whether they were actually duped by what seemed like favorable news to the Trump campaign ("if something seems too good to be true..." is the beginning of a well-known adage) or whether they knew it was bull but ran with it anyway.  See, voter suppression of known liberal demographic + mobilizing the anger of conservative voters seems to have been the strategy of the Trump Campaign, itself. And what would do that better than casting the Clinton campaign in a dodgy light?

And the creation of fake news and propaganda wasn't solely for the benefit of the Trump campaign--folks in, for example, Macedonia, made bank on it. (Although I do wonder--who did the paying?) To take it a step further, it seems that automated bot accounts on social media spread pro-Trump propaganda--who made them?

Regardless of which pro-Trump supporter(s) unleashed the digital flying monkeys, I think this activity probably did have an impact on last-minute and first-time voters, whose impact was greater this year than in 2012. That article make reference also to the FBI Director Comey's October surprise letter regarding Clinton's emails. There's reason to believe this too, had a strong last-minute impact. (The possibility that Comey reached out to Lewandowski, who does not seem, CNN notwithstanding, to have ever left the Trump campaign, is really odd, is it not?)

But what kind of actually galls me is that some of the fake news on which probably well-meaning people made their decisions was based on sheer cynicism. This interview with the writer of the fake paid protester story is sort of face-palmingly awful: the guy made things up for Trump fans just because he knew they would pass on anything, and admits that no one really needs to get paid to protest Trump. (Examine this interesting reflection by a site called True Pundit. Possible NSA pick Gen. Flynn spread one of their fake stories. I suppose one might meditate a moment on how likely it is that a) Democratic ops would go out of their way to spread negative disinfo about Dem candidates, even if fake, and b) whether it is probably more accurately said that, regardless of the source, one is responsible for one's own beclowning if passing on unsubstantiated bullcrap.)

This isn't even to go into whether the impact that the possible hack by Russian agents of the DNC as "leaked" by Wikipedia (and whether any of that was spoofed or altered in any way) had any especial effect--although I agreed with Senators Graham and McCain that the hack itself is worrisome and should be investigated.  It's to say that social media sites and we "internetizens" need to do a better job of weeding out and not passing on utter fabrications. (It appears that Facebook may have an algorithm that guards against fake news--but didn't deploy it because it disproportionately effected conservative-leaning sites--they have been burned by claims of bias before.)

Anyway, you might recognize my blog title is a play on Leni Reifenstahl's movie Triumph of the Will, which is acknowledged to be a masterpiece of propaganda. The "swill" is that practically anyone can, faithlessly, throw any crap against a Facebook wall, and see if it sticks. And some of it does. A crap-based politics is not good for democracy, though.

Posted by Vixen Strangely at 11:50 PM