Frigging in the Rigging 3: The Flag it is How you Say, Artificial So a really weird thing happened just a bit ago--Trump was appearing at a rally in Nevada (does he pronounce it right yet or what?) when he was whisked offstage because somebody apparently said "gun" and indicated a person who had a sign. A sign. Because he would most likely not have a gun, since there was a metal detector at this political "do".  But of course he wasn't done talking about the rigged system, so, he went back onstage, which is a thing the Secret Service never would have permitted if there was a real security breach.

In other words, there never was any danger. There was no assassination attempt. Nobody had a gun at all. It was an aggravated case of the collywobbles. No one tried to pull a von Stauffenberg, here, m'kay? But let's just take a look at what was being said before the shit-lossage took place:


Trump made his last-ditch effort for Nevada voters in Reno on Thursday during a speech to about 4,000 at the Reno-Sparks Convention Center, even as the numbers show an increasingly difficult path for to victory. During his speech, Trump criticized the decision to leave the polling location at Cardenas grocery store in Las Vegas open until 10 p.m. as more than a thousand people flocked to vote. Trump said Democrats were bused into the area to vote.

“It’s a rigged system and we’re going to beat it,” he said.

“Last night, in Clark County, they kept a poll open until 10 o’ clock at night so a certain group could vote,” McDonald said.

How to unpack it all--I know! I don't give a flying fuck whether people come out to vote in busses, taxis, Ubers and Lyfts (the way they very may well have to here in Philadelphia, where SEPTA is on strike and we have no early voting --but my friends--there is a discount called "free", and that is not rigging, sir, that is called a "ground game" )  or Conestoga wagon. If these people are citizens and registered to vote, there is no good reason you should have a problem with them being in this process. Except NV GOP Chairman McDonald apparently has a problem with "a certain group".

Mmm-hm. They know you have a problem with them voting--that's why they are doing it. Same thing is going on in FL and NC.

But I do want to highly protest this idea that Hillary Clinton "ran away from the rain"--who are you now? 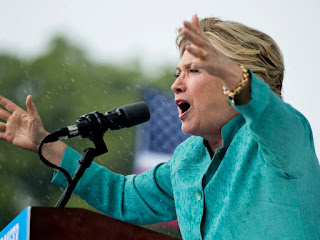 Yeah--this is her not running from the rain. Her speech might have been short, but it reflected her stamina and her concern for her audience standing out there. And to me, that's all like, exactly enough for me. And despite the involvement of Russia, WikiLeaks, the FBI, Fox Mushroom Farm, Alex Jones and the National freaking Enquirer--she is still here, too. Rigging you say?

UPDATE: Here is more detail on the "assassination attempt' that wasn't.

UPDATE 2: This is Austyn Crite, a Republican who just isn't that into Trump.

Hi Vixen, I'm actually surprised to see your new posts, as I thought you were staying away until after the election.

Because of the ever-present threat from radical Islam, we have to take perceived threats very seriously. The Islamic State has announced they will slaughter us and smash our ballot boxes. An assassination of one of our presidential candidates would be a tremendous coup for ISIS or al Qaeda. And I am concerned about voting areas throughout the United States on November 8. Islamism is a relentless enemy, and regrettably we have Muslim American citizens who are radicalized.

I do think that it does take some bravery on the part of Trump to go right back on stage after the provocation he received. Naturally it turned out to be someone who presently identifies himself as a Republican against Trump. (This is probably a cover, and we will find out later if this is truly the group he is part of.)

There are a number of ways for assassins to get past metal detectors. And especially if they had the knowledge possessed by radical Islamic planners. Thank God this situation did not really signify something physically dangerous. All of the candidates' security details need to be extremely cautious now that radical Islam has declared itself.

It is also a shame that propagandists have ginned up hatred through lies and non sequitur arguments; creating hatred sometimes has an effect on unstable personalities. And in the United States we have millions of people with marginal grasps on making good value judgments.

Detachment--yes, but disengagement? For me, withdrawing entirely would be unhealthy. I've read stories about possible militant attacks planned for election day and wonder a little about that--it strikes me that only "saying so" could be sufficient to disrupt voter turnout if I gave a piss what others wanted to do to upend democracy--as for me, I'm still a practicing American.

But you are right that it took some bravery on Trump's part--after all, he has had people rush the stage at him before, and in one instance I think a guy tried to get hold of a Secret Service officer's weapon. That sort of thing, even if found to be a tempest in a teacup, is nerve-rattling, and he came back on message.

It bothers me that only someone yelling the word "gun" could be sufficient to cause such a flurry of concern though when the person in question did not happen to be carrying--here's where I have an odd train of thought--a lot of Trump supporters seem to be staunch 2nd amendment folks. They have ideas about open-carry (I just feel like displaying a firearm is like signing a promissory note to use a firearm, myself) and I've heard reports of self=appointed poll watchers turning up here and there armed. Trump himself has derided the utility of gun-free zones, so I sort of wonder at how suddenly an imaginary gun was as good as an assassination attempt--but who knows? I suspect the person who shouted "gun" had more of a problem with the protester brandishing his 1st amendment rights in public than suspicion that an actual assault was about to go down. But I wasn't there, and my impression is (I admit!) a bit biased.

I do think it is a shame that propagandists spread hate and lies. My candidate has ben called a "traitor", has chants of "Lock her up" and "String her up" made against her, and people in the immediate Trump circle have made "firing squad" statements about her. As with you, I don't think this environment has been helpful to democracy, and can encourage people who have no damn sense to do very damaging things.