Emails Story-Not a Bang but a Whimper? 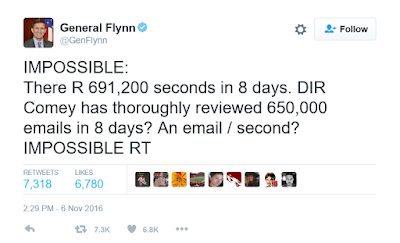 So, despite the "bombshell" that was heralded as "the FBI is re-opening the Clinton emails case!" that was cacked out last Friday, before any of the emails in question found on Anthony Weiner's laptop had even been looked at, it turns out there was an awful lot of nothing turned up.

Well, of course there wasn't. The email thing is quite possibly the most boring thing that has ever been prodded about as a potential scandal. "She violated workplace guidelines because she was the boss and found carrying two phones inconvenient, hur dur..." Yeah. Well. That's actually it. It doesn't actually rise to the standard of treason, does it? The sort of wild things like hammers being taken to devices no longer useful or the info retained being extracted by a program like BleachBit, which Trump likes to go on about (although I don't think he understands it in the least since he calls it "acid wash") are actually not at all dodgy but recommended.

I think the funny thing though, is that Trump and his surrogates are bummed that FBI Director Comey is now saying they investigated those emails and there is no dropping of any further shoes. Thus, the Tweet above from General Michael Flynn, former Director of the Defense Intelligence Agency, who does not seem to know that this investigation could have been achieved quite rapidly with computers.  Yeah, with time to spare. Like, before making the announcement eight days ago that there was new information, he could have totally obtained the warrant, had the new information gone through, and cleared it out without ever casting suspicion on a presidential candidate.

Now, there is some anecdata evidence that Comey's original letter (yeah that timing is not satisfactory to say the needle truly didn't move based on the date--you needed to see where we were a few days later) did not actually move the needle that much, or maybe actually motivated people to vote for Her (it sure did make me hot!) But this additional move?

Please. Like Senator Sanders said--enough with her damn emails! This isn't impeachable--and if it is, when does anyone address all the other officials who have had separate servers, private accounts, and deleted emails? Because this frankly isn't rare and in practice, what Clinton did is really just a mistake--not disqualifying. As with the Benghazi hearings, that were admitted to being about "getting" Clinton, I don't feel these investigations are about truth--but politics. This is why politics has the shabby reputation is has. This kind of stuff needs to end for people to get back the kind of approval of and belief in our civic institutions we need for democracy to work. There is a good reason for the low approval the American people have for Congress, and this kind of fuckery is it.

Don't just vote the top of the ticket, and if you don't love Hillary Clinton--don't let this stop you from coming out for the lower ticket offices. We need to vote out witch hunters and get people who want to work for their constituency.
Posted by Vixen Strangely at 12:53 AM