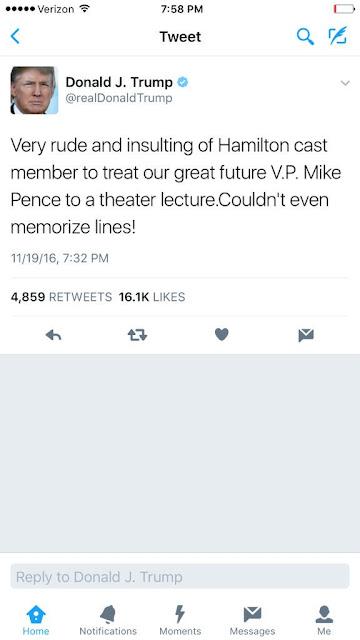 In a soon-to-be-deleted Tweet, the President-elect groused that the cast of the hit Broadway play Hamilton was somehow rude and insulting to VP-elect Mike Pence in delivering the short comment that was written when it became understood that some comment might be needed.

It is a pity that Brandon Victor Dixon, who gave those prepared remarks that weren't even really condescending or even rude, didn't have a TelePrompter handy to speak as prettily in public as we all know Donald Trump can sometimes do, but you know what? It doesn't even matter. Except maybe it does to Donald Trump? After all, keeping up appearances like being Presidential and not still on the profit-machine might matter. Stepping onto a national stage--not a mere Broadway stage, is scary, and maybe one needs to keep ones friends and family close. And maybe even ones future combatants/negotiators/allies/etc.  closer?  But it sometimes looks all wrong without the appropriate misdirection onto those big theater meanies who make Mike Pence feel bad.

Donald Trump needs to know he is the show now, and we are all watching him and his VP-Elect. Because Pennsylvania Ave is very different from Broadway, or Fifth Avenue. And he should expect to continue to be dogged by elites. And not-so-elites. That's democracy and free speech at work. And whining about it is very bad form.
Posted by Vixen Strangely at 12:50 AM

The bigger question is what does Trump/Pence do as more Americans refuse to show deference or when other countries "insult" him or someone in his cabinent.

I'm certain Newt Gingrich, Chris Wallace, Laura Ingraham, Scott Adams (Dilbert), Ann Coulter, whomever are frantically telling Trump that they will willining handle the propaganda war and for him to stay above the fray but, I don't believe Trump can help himself.