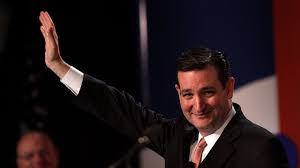 So, repellant little TX senator Ted Cruz, who I dislike for ample reasons, made a funny statement about the SCOTUS being kept at 8 members because for some reason, he just doesn't think it would be okay for an elected Democrat to fill that spot. It might be Constitutionally correct, of course, but well? There's just something about it....

No, actually, there's nothing about it. If a candidate gets more of the votes and becomes the POTUS, that person gets to make SCOTUS appointments. This isn't some weird new socially-permissive thing we're trying on, it's the valid tradition of our democracy. What he's talking about is a level of obstructionism that makes the McConnell approach seem touchingly responsive and fair--and to be touchingly fair about that, it's always been stupid and wrong. What he's trying to say is that if more people vote for Hillary Clinton, it's just not fair to him that she gets to act as president, and that is just not how it works. She gets to be President. He has to be a Senator--

But if he doesn't like being a Senator, I guess there is a perfectly Constitutional remedy for that, isn't there?
Posted by Vixen Strangely at 6:51 AM

If he wanted that much control over the Court, maybe he should have run for President.

Realistically, though, looking at it from a constitutional perspective... If I ask you for your advice and consent on something and you still haven't gotten back to me in nine months, wouldn't I assume you've waived your input entirely so I could just move forward?

What do they say--silence implies consent? I think you have it right.