Keeping Up With Trump is Exhausting 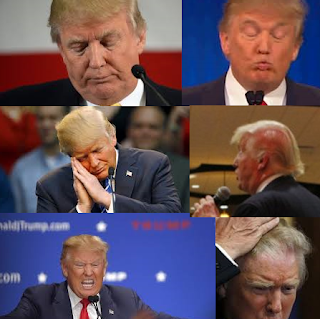 Sometimes, a blogger doesn't even know where to start with a presidential candidate like Donald Trump--I completely agree with Upyernoz that stories that were exceptionally fascinating, like his violation of the Cuba embargo, his slut-shaming of a former Miss Universe over a fake rumor of a sex tape (when Trump himself has appeared in a porno and wanted his second wife to pose in Playboy--the latter being exceptionally tacky because I read it as Trump wanting to display his trophy) don't even get full traction, because no sooner does someone start looking into a lead, there's more crap! Fresh crap made daily! If blogging is your side-gig, there just aren't enough hours in the day to take in the full scope and breadth of The Donald's wretchedness, and it's mostly up to full-time journalists (like the estimable David Farenthold) to get into the nitty-gritty. But there's so much nitty! And it's so gritty, people!

So let's say you are interested in how Trump used his Foundation's money to pay a contribution (or bribe) to FL AG Pam Bondi. It might equally interest you to know that this is not new "pay to play" behavior for Trump, because he has used his various corps and cut-outs to donate significant sums to state government candidates for various reasons. It might equally interest you to know that the NY AG just issued a "cease and desist" letter to the Trump Foundation to stop it from raising funds because they aren't set up to solicit them. Both ends of that story are basically really shady behavior in a "black letter" kind of way--they don't "look wrong". They are.

Let's say the story of Trump's singularly weird obsession with Alicia Machado bad-mouthing him to the extent that he went on a "wee hours" Twitter rant this past Friday--it might also interest you to know that  alumni of his long-running reality TV series "The Apprentice" also found him to be kind of a sexist pig.  But you might miss that story, because no sooner do you see it, than you find that he has basically labelled vets with PTSD as "weak".  (Great shades of his infamously tone-deaf "I like people who weren't captured." Still and always missing every point about what bravery is--sometimes you don't win every battle but the pride is in attempting, and service members who suffer trauma are not weak, they are deserving of our respect and decent care.)

Even the most basic not-simpatico things, like how he could screw over US steel producers by buying from China (who he now wants to tell us screws us over at every chance--with whose help, Deadbeat Don?) might escape notice. I see so many stories that as a blogger, I feel like I ought to give a shout-out to in order to signal-boost his basic dishonesty and fraudulence. But great gosh almighty! It's exhausting to keep up with someone who is a graduate course in how to be extraordinarily shady. He is on a level of ethically non-fit that sinks the needle. It's like the behavioral equivalent of the "Gish gallop", where so many untrue statements are made that it's crippling to the discourse to swat them all. Might I suggest the "Trump Trots"?

I will try to canter alongside the best I can.


EDIT: Also he did business with an  Iranian bank linked to terror.  So whatever. Worked with Gaddafi too. It's just borderline awful--but sort of a proof of the general premise.
Posted by Vixen Strangely at 11:40 PM