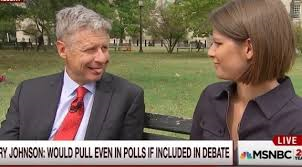 I know I brought this up pretty recently, but it still remains entirely true: Gary Johnson is a flake and not a real third party choice for anything. If more evidence was needed, might I suggest we look at recent comments regarding the silver (tin foil) linings he found to his lack of geographic knowledge:

Mitchell responded that Johnson was running to be commander-in-chief and that knowing how to answer such questions was "part of the portfolio."

Johnson replied that "the fact that somebody can dot the I's and cross the T's on a foreign leader or geographic location then allows them to put our military in harm's way."

"We put our military in this horrible situation where we go in and support regime change," he said. "They get involved in civil wars where hundreds of thousands of innocent people are in a cross-fire ... we're literally shooting at ourselves because we support both sides of a conflict. Syria is an example."

I feel like there is a slogan in there, somewhere. "Ban maps, end wars." Or something.  The GSA has denied the Libertarian Party ticket security briefings. I might suggest Johnson could invest in newspaper subscriptions. This might curtail him saying things like this:


In the Times interview on Wednesday, Mr. Johnson conspicuously sought to avoid another misstep. Asked if he knew the name of North Korea’s leader, Mr. Johnson replied, “I do.”

“You want me to name” the person, he said, then paused, before adding dryly, “Really.” But he declined to supply the name.

Yes. Providing the name would actually be more reassuring than questioning why one is being asked, especially when one is making moral equivalencies about aggression without reference to who is supported or why.

The reason I wonder about this is because there are still people who are leaning Johnson when there is no solid reason for them to do so. And when even his own running mate understands the reasons why Trump has got to go and the GOP has got to remedy the sickness that made him nominee, more than why third parties need to get heard out.

The argument for Johnson is not making a choice, but making an abdication from a stark one. You don't have to love Hillary Clinton. You just have to know she is the only person who is not Trump who will win and that she knows what she is talking about and cares about the issues. This is serious. Johnson...is not.
Posted by Vixen Strangely at 11:34 PM

I feel like there is a slogan in there, somewhere. "Ban maps, end wars."

I think Orwell beat you to it: "Ignorance Is Strength."

Hi Vixen, I have become so disgusted by our political process and the people who run for office that I am almost ignoring it.

I went down to the courthouse the other day.

“Hey Reba, when are we going to have early voting?”

“Hey, Laverne! When are we going to have early voting?”

“Is that official?” Reba called.

I am so disgusted with everyone in politics that I will go and vote early. Then you can go vote and cancel out my vote. However, the gracious and lovely Alicia will vote. But then your husband will cancel out her vote. And so the work of our great democracy will roll on.

Here's something. The vice of Hod is dishonesty. Our political process and our activists use dishonesty as mother's milk. Dishonesty leads to the Tarot card of Judgment.

The vice of dishonesty then becomes incorporated into the Ruach, creating huge amounts of karma and retribution vis a vis the concepts that the Tarot card Judgment represents.

Politics may not have been as corrupting when it was something you were not bombarded with on a daily basis. Today politics has become a corrupting vice, tragically punishing people who believe that they are doing good.

Wake me when it's over.