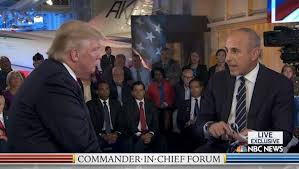 The "Commander-in-Chief Forum" to be exact. It was not a great intro to the candidates, in part because Matt Lauer is basically a social journalist--he seems to be at home with fluff, but following up on questions? Researching what his interviewees' positions are? Not so much. He went after Hillary Clinton on the email issue (not that I think he understands where any problem exists, just because he feels like he should) but he let Donald Trump lie about whether he supported US involvement in Iraq, Libya, or Syria (um, he was in favor of all three). Trump also got an opportunity to tell us once again how much he likes Vladimir Putin.  He also thinks just up and stealing oil is a thing people can do. He is unclear about the existence of military courts and does not read things.

This is not a good look, Trump. Even with fluffer Matt Lauer, Trump looked weak, subdued, mendacious, and sad!

This was not any good. I look forward to how the mainstream media will try to convince me it was.

Take this sort of thing:


The event brought together the meticulously prepared Clinton, 68, the wife of former President Bill Clinton, and Trump, 70, a New York businessman whose brash, freewheeling style has allowed him to dominate the headlines during his campaign.


Surely, they mean "former NY US Senator and former Secretary of State Hillary Clinton" who is meticulously prepared by her life experiences, not, like, just being a nerd who reads things?

I really deplore the state of modern journalism.
Posted by Vixen Strangely at 11:59 PM