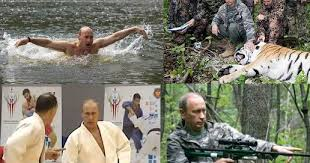 I think the most brilliantly troll-like thing Donald Trump has done, is get Mike Pence (because I know your far-right history, player) to sort of praise Vladimir Putin.

Of course this is bullshit. Deep down, I don't think Mike Pence has a minute of praise in him for Vladimir Putin. Mike Pence is, from all I know of his record, hawkish and wary of Russia--and yet? Being Trump's VP fig leaf has him agreeing that Putin is stronger than Obama? The guy who is ordering strikes that destroy hospitals in Aleppo (for Gary Johnson, if you ever come across Strangely Blogged--Aleppo is a city in Syria where many refugees are coming from because Syria is a bad place to live in right now and if you want to pretend you know anything about foreign policy--you would have known that. But you did not. Sucks to be you.)

Putin is trying to hold on to his relationship with the appalling Assad, and I think this is dumb because sometimes, it is better to see into the future then try to preserve an unworkable "now". Putin is fucking up shit in the ME--key words: Fucking up. But that isn't strategy.

The Trump/Pence thing with Putin makes so little sense to me I'm not even going to try analyzing it--but that it even is a thing is poor judgment all around.
Posted by Vixen Strangely at 11:52 PM