Hillary Clinton is Tough as We Need Her to Be 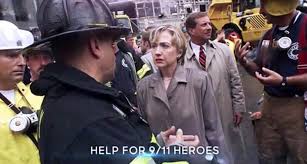 There's something to be said for the rumors about Hillary Clinton's poor health--they have been greatly exaggerated. After all, Clinton tried to maintain the grueling schedule required of a presidential candidate with a case of walking pneumonia, which I myself had during finals week my senior year at college--and let me tell you, while one is still pretty capable (I aced my tests, BTW) it is definitely not fun. Being sweaty-hot and then having chills for no especial reason while producing pints of lung-lather is not really an occasion of fun and joy. And yet Hillary Clinton kept her condition on the DL and attended the 9/11 memorial only to leave early and a bit unsteady, prompting further gossip (which is what you call that thing where you think you have a story based on what things "look like") about her physical fitness.

I would have ditched my finals if make-ups were even a possibility--and I was 21 and at the absolute peak of my health historically. She's not 21 and maybe at that age not at the peak of her physical fitness, but she felt obliged to go. Because there is such a thing as duty. Now, some people who never believe Clinton is up-front and transparent enough for them might complain about how she didn't just make a brief of her diagnosis on Friday when she got it to keep reporters in the loop.

Are these people out of their damn minds? For one thing, do they think every sniffle is their own business? For another, does something like pneumonia feel like the story you would want to make of your weekend when you already damn well are committed to showing up for the anniversary of a terrible thing that happened while you served, ably and well, as US Senator?  This woman committed herself to her constituents wholeheartedly in the wake of these ghastly events. When she saw that first responders had been ill-served, she fought for them. In their memory, she made a point of attending that memorial, because she is dedicated to that kind of service. The kind where you show up.  She felt like shit but she showed up today.

This is why I approve of this editorial that calls Hillary Clinton The Bitch America Needs.  It's a disgrace that sexist language best conveys her strength--but so be it. She is tough enough. She cares deeply and will do what is needed, even when her own self-care is at risk. She loves this country and wants it to be well, and she understands the motherfuckers who stand in the way of this country doing just that. She might stumble, but then again, one of our greatest wartime presidents was a man who rolled.  The idea that any physical infirmity is a barrier to offering great service to this country is sheer ableism, and discounts the tremendous capacity physically "flawed" people have to contribute to our society.

I want her to take a little rest and let some of her capable spokes folks do the heavy lifting for the next couple. You stay strong, Hillary Clinton, and we will be stronger together when you are feeling better.

But just so you get what I am saying--don't mistake a momentary infirmity for a long-term incapacitation. She is capable and tough. I have long been documenting what her press is about, against what she has accomplished. She is by all means strong enough. Her supporters (let's really dispense with this nonsense about how we are not energized, ok?) are with her, and we will add to her strength. Together we will. Knowing what she does when no one is even looking, I am ride or die for this lady.  She cares. I care that she cares, that is all.

Posted by Vixen Strangely at 11:27 PM

I wish she had said on Friday, "You've noticed that I've been coughing lately. I thought it was my usual late summer allergies, but it turns out I have a touch of pneumonia. My doctor prescribed antibiotics and rest. I'm taking the antibiotics, of course, but what I'm doing now is too important to stop, so I'm going on with a little less rest than the doctor ordered. She said the pneumonia will make me tired, so, if I seem a little down, that's what's going on. I'll keep you informed if there's any significant change. When the doctor says I've recovered, she'll give you a report on my health. Until then, this is the last time I'll talk to you about this." I can't imagine the reaction would have been any worse than Sunday's, and it might have been better overall. The health of 70-year-old candidates is a legitimate concern. An open approach would have been a great contrast to Trump's ridiculous doctor's note. Instead, she's made his conspiratorial claims seem reasonable.

Here's what I think the deal is with the Clintons--they are damned if they do and damned if they don't when it comes to transparency. If Hillary Clinton did the most sensible, normal thing, of saying "I've got a touch of pneumonia and I'm taking a few days off"--that is not going to be what, like a third, of people will believe. They will speculate "well, her campaign is saying it's pneumonia, but there's these rumors..." and also "Maybe there's some kind of other, ulterior reason she's not attending this 9/11 event. They're resigned to the idea that they can't win, so they go ahead and do what they think they've got to do.