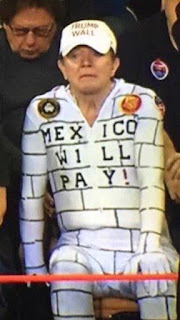 There is a grain of truth in what the wag who coined this sudden trip to Mexico by the Trump Team as "a Hail Maria pass" is implying. This is the sort of "can't get worse" reasoning that leads to big splashy plays, which Trump, as a reality TV guy, completely understands. You do big things and get ratings. It makes sense. What gets ratings? Something to look at. What would people want to look at? Things to do with the issue he ran hard on in the primaries where all he did was win, of course--immigration and the big beautiful wall! Why wouldn't that be where he went? That was the most successful thing that worked for him. You build the great big beautiful wall with the nice door in it, and Mexico pays. Mexico pays and this is how the US wins--

Except this is incredibly dumb, and Trump could not possibly expect Mexican President Enrique Peña Nieto to actually play along. See, this whole thing where Peña Nieto invited him so they could have a nice confab where Trump scored foreign policy bonus points as if he was not running against possibly the most travelled and foreign-policy-experiencing human of all time, where Trump looks like a God condescending to visit Mexico who he will so demand a payment for the building of a wall from, was always a dream.  As a candidate for office, not an office-holder, there's the Logan Act standing between him and crafting foreign policy--which doesn't preclude the actual host government official, Peña Nieto, letting him know what diplomatically isn't possible--Mexico will not pay for building that stupid wall. The Mexican President has a very low favorability, but not as low as damn Trump has in Mexico. Saying "Hell no!" to Trump should have got him a bump, but he squandered it  by not doing it at the presser, but after the fact. So he said "Mexico won't build that wall" and Trump has shit to say, because he isn't actually in charge of anything at the mo'.

So far, just reasonable. The news of Mexicans protesting this whole thing is hardly a concern. People can pretend he was being presidential, except for the lying about whether he discussed the wall and the paying thereof of with Peña Nieto--even though he says it was totally suggested and rejected. SO what went on from this?

He doubled-down on everything from the primaries. No amnesty. More deportations, He did not soften a damn thing, and left some watchers thinking maybe this here pivot is just not even a thing.

And once again, this pivot thing never did happen. Nope, not ever. His base would be too mad. He is anti-immigration guy forevs. So white, far-right and uptight, you guys.

Posted by Vixen Strangely at 11:40 PM