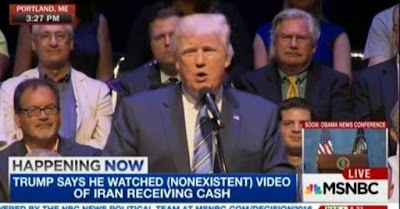 When Donald Trump started describing a video that he watched of a plane where money was being off-loaded to Iran, discussing it as if it were very secret and not something everyone knows about, he created ripples of speculation: Was he now passing on classified information from briefings? What is he even talking about? Does this video exist?

But nope, that isn't what happened:

A Trump campaign spokeswoman told The Washington Post early Thursday that the businessman was, in fact, talking about the video from Geneva. She did not explain why he claimed it was a top secret video from Iran.

The video was “merely the b-roll footage included in every broadcast” of the prisoner release, spokeswoman Hope Hicks confirmed. Hicks did not respond to a request for comment from The Huffington Post.

This means that Trump told his audience a half-dozen things about the tape that aren’t accurate. The video he saw was not shot in Iran, it did not show the exchange of cash, it was not “top secret,” it was not “a military tape,” and it was not “provided by Iran.” Nor was it released to embarrass the United States.


None of what he said was actually true. Not Iran, not top secret. Weird, right? And he even did this stupid thing again today in Portland, ME--mentioning the b-roll of a thing that was not clandestine or a drop in Iran or filmed by Iranians or even really even remotely embarrassing to the US any way as if it were all those things. The intelligence community, you think, wouldn't be amused, but they kind of are. Because it is literally laughable--this was a transfer of funds so not secret that Secretary of State John Kerry had it on his website. A person would have to be incapable of research (oh hey, Wall Street Journal!)or probably just not interested in details--right about January when it happened, to have missed this thing that some folks want to blow up. Which includes Donald (so prepared to be President--believe me!)Trump.

So why does Trump persist with the stupid lie? Ronald Bailey at Reason noted that Trump seemed to be using the Hitler era "big lie theory": "Make the lie big, make it simple, keep saying it, and eventually they will believe it."

It's what he does, isn't it? He repeats that the US is the most-taxed nation in the world--that isn't true. He pretends we have no vetting process for refugees, we do--it's a humdinger. He acts like we're overrun by undocumented workers--actually we have zero net immigration of any kind from Mexico, which he falsely says is sending its rapists and gang members. (Look at the link there--WSJ doesn't always suck--I'm saying I love you guys, keep the good work up.)

And take a look at his campaign--one of his main spokesfolks Katrina Pierson made the really weird claim that somehow, the policies of President Obama and Secretary Clinton were to blame for Captain Khan's death (although, the thing was never really about assignation of blame for his death--but whether his sacrifice was sneered at by policies that aimed at targeting people of his heritage for being treated as non-citizens or less-than--but obviously Obama was not president in 2004 and Hillary Clinton was not Secretary of State then). It's imbecilic in every way. A big lie. But campaign manager Paul Manafort goes on to casually repeat it, as if repeating it makes it sort of so.

It should be laughable that the Trump campaign are so transparently lying shits. But unfortunately, lying shit sometimes takes on a life of its own. "Repeat often" has a magical significance. For the type of folks that believe that ACORN really was responsible for election-shattering levels of voter fraud, or could potentially be turned by Trump's racialist "rigged" inferences, yeah--they are primed to believe incredibly dense lies--even stuff I laugh off as stupid. This is who some of these people are.  You know those people aren't fact-checking, aren't thinking. Aren't reading "thinkpieces". Those motherhumpers want blood at some point.  And that's his audience. That's who he's aiming at. People who forgive him for after the fact pretending he never supported the Iraq invasion or the Libyan intervention.

I want this cretin to lose so bad no one ever tries this shit again. I want this cretin to lose so bad those folks go out and learn why the attempt failed so hard and really do learn how to channel their energy into something that will work. Because he is lying so much--and before anyone ever asks me if Hillary Clinton ever lies--well, not so much, no. She doesn't so much at all. And as for the latest dumbfuck debunking of whatever she says Comey said--he hates her, is a Republican, has dealt with her before, but he even said she didn't lie to him. Didn't lie to the FBI--didn't lie under oath.

Why are folks so hard on Hillary Clinton and give Donald Trump some kind of dumbass pass? It's a double standard that of course has to do with unreasonable high expectations for her, and incredibly low ones for him. But I wonder what would happen if his folks finally realized what he was doing was all a big lie?

Could they give the bad credit where it was due? I sit on my hands and I wonder.