View From Night Three at the RNC 2 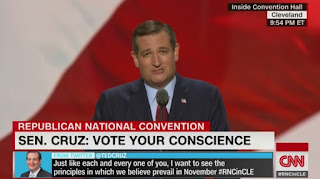 Senator Ted Cruz gave a barnburner of a speech in favor of the Republican Party and the conservatism for which it stands (although I do not agree with the way he tied the GOP to civil rights as if the switchover never really did take place after 1964 with the nomination of segregation supporter Goldwater for the presidential nod and Nixon's "southern strategy"). He did not endorse Trump. He advised that conservatives vote their conscience.

I think he did exactly the thing he needed to do to be viable in 2020. I'm not saying I have a new respect for the man, but I think he's savvy as all hell. He threaded the goddamn needle.

I mean, they booed his ass. But he might get a little satisfaction down the road, is all I'm saying.
Posted by Vixen Strangely at 10:10 PM