So I'm Petty, Sue Me 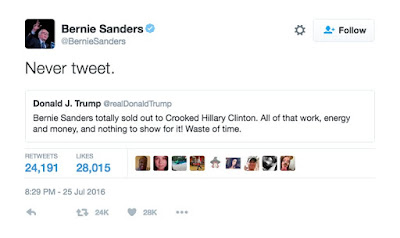 Of course, Michelle Obama and Senator Elizabeth Warren gave absolutely grand speeches this evening; Obama bringing in an inspiring historical perspective about the direction of this country, Warren laying down the truly stark choices we are facing in this election.

But I've got to give it up for Bernie Sanders--he laid out the case for why his supporters should vote for Hillary Clinton. It wasn't an easy speech for him, and he'd even said himself that the job of party unification was up to the presumptive nominee. But in an obvious contrast from Senator Ted Cruz telling the RNC audience to "Vote their Conscience", Senator Sanders basically said, "If you have a conscience, vote for Clinton."

That's huge. Today was marked with Sanders supporters (I use the term loosely, I think they are more against things than for them based on their behavior) engaging in the kind of hostility that would have been more at home in the other guys' camp. There were chants from some of these classless class warriors that tried to stomp all over the speeches of people they could have heard out as allies instead of treating like enemies. (I misheard "We trusted you" directed at Senator Warren, as "prostitute", and wanted to drive down and start punching hippies. It's like that, now.)

But Senator Sanders himself showed his qualities by trying to be the peacemaker and the unifier. He hushed up Donald Trump's gross insinuations that Team Gilded Toilet could win over people who genuinely understand that income inequality in the country isn't going to be any closer to fixed by letting a conman into the White House.

This isn't to say those people who were feeling the bern and now are Trump-curious don't exist. Cable news programs are looking hard for those people and found a few. But let's just come out and say it--those folks are not a revolution. They are a tantrum.

But I'm petty. This Tweet basically sums up how Trump looks at people--if Sanders isn't anti-Hillary, well, he needs to be insulted. The Sanders Twitter reply is as dismissive as it ought to be.
Posted by Vixen Strangely at 12:17 AM

Lookit. In 2012 I was very concerned. Perhaps even terrified. Mitt Romney was running a strong, well funded campaign and there where there was a lot of unity on the right, there was a lot of dissension on the Democratic side. I argued aggressively, forcefully, sometimes it seemed, desperately, with my liberal friends that voting for Jill Stein or staying home was a hundred times more counterproductive to their stated goals than voting for Barack Obama. In the end, Stein got a ludicrously small popular vote, and Obama rolled to a second term as the natural Democratic coalition asserted itself.

This time around? Hey, you guys, knock yerselves out. You don't wanna vote for Clinton? That's fine - piss your vote away on some third party nobody who doesn't have a chance or just stay home. Same thing. Don't make no never mind to me either way.

Trump is so hated, his coalition is so limited, his past so sleazy and his message so grotesque that he cannot win. He will win red states full of hate and bigotry because - and we WILL need to come to terms with this - that is a major portion of who we are as Americans. But he will lose in November to Hillary Clinton. Which isn't saying a great deal - he would lose to a ham sammich and a bag of chips - but it's a great break for us because she's the best steward I can imagine for this broken system.

But that means we don't need you guys. You go right ahead and throw your tantrums - we'll be fine...

Have this thought that might explain the young white folks who make up the Bernis or
Bust group.

It occured to me that this group of young people grew up getting trophies for participation ...not winning or losing (second place) ...participation!

They got toys with their Happy meals ... treats IN their ceral boxes ...celebration parties for "graduating" to High School ... rented streach limousines for the High school graduation dance, etc.

These are the children of the kids raised by parents who got their child rearing advice from Dr Spock.

These young people are mad as hell because after their "heart" felt participation ...they get no trophy ...no toy.

AND ...have no clue as to what to do next...unless it involves pouting, crying, stomping their feet and screaming "I don't want to play any more...didn't like this stupid game in the first place ...waaaaaaaaa!

I for one will be glad when they grow up!