So, I Was Wrong About Turkish Democracy 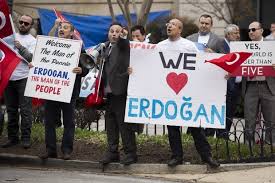 The way I was seeing it, Turkish president Erdogan would have understood that democratic fervor and social media basically saved his ass, and he should have seen his return to power as reflecting new respect for democratic values and openness of political speech.

This is exactly what we are not seeing. His government has now seen fit to punish more people for the coup than actually ever could have participated in the coup, because if so many had, it might have actually been successful. It was almost as if he had an "enemies list" handy, to have found so many intellectuals and academes culpable.

This is, of course, an appallingly wrong way to do democracy--for the love of stability, Erdogan should want to reinforce the idea that he is most definitely not a tyrant and follow up with more liberalization of the media. Give people a reason to think you actually want to do better and be accountable.

He is doing the idea of democracy a mischief, the way he is doing it.