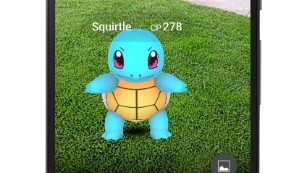 Now, I am a little old for being down with this newfangled Pokemon Go app thingie that the youngs have been on about.  Frankly, you can just call me Unfrozen Cavegirl Tech-user, because I use phones for making calls. That's it. I don't play games. I'm not much of a "gamer" as such, which is so weird when my dad was a Colecovision early adopter and my brother is kind of a YouTube retrogaming historian. I dunno. I liked Tetris, although I don't know that I want to see a movie trilogy based on it. And I feel like Pokémon is just peculiarly naïve. It's not "I just used this thing on my phone to hook up a ride with a stranger" kind of naïve. It's not "this guy on my phone says my computer might be broken and I should give him root access" kind of naïve. It's just...

I need a higher standard of entertainment to effort ratio than "I walk because my phone says I might get points." Otherwise, I accept my points in drinks, pieces of candy, backrubs, the sexing, and doing politics shit on the internet for yoinks and the vague feeling it helps, all of which use so little effort and never leave any of my data compromised (or very little, given my understanding that I am, at best, a semi-anonymous smartypants operating on these here interwebs) and yet give excellent entertainment "bang" for my input "buck".

Also, the problem with an IRL/VR interface like this is it's like an invitation to play in traffic--dopey people walking where they have no business, possibly having the app on when driving, and all the usual Darwin-Games events. I don't like the idea of people letting this kind of thing lead them to be guided into a particular region--are you really groovy with going anywhere the little man in the phone tells you? What if you were being maneuvered into the kill-zone for Skynet because the rise of the machines was upon us? You are op-secing very badly, my friend. And if everyone was jumping off bridges would you? And I don't care if there's a Charmander on my lawn--stay off my lawn!