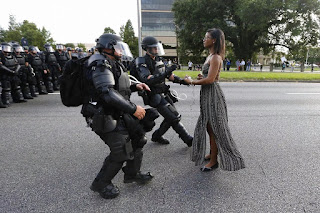 Will this majestic young woman dance with three Robocops? Yes, she is ready to see them.

It is altogether possible, nay, I would say probable, that the overwhelming force that certain departments want to have comes back to bite them because this revolution is not televised, but is definitely live on social media.

There is a precedent for images being louder than words. Baton Rouge, LA, you are on the most candid camera we have ever known. 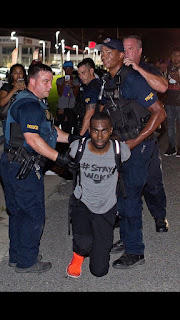 Maybe one should just figure out how to accommodate the idea that people should not be summarily executed instead of figuring out how to better arrest protesters? Circumvent their anarchy by just doing government better?

I know this is a longshot, but it could really probably work better than this ugly on camera business. Because no--cracking down on BLM isn't looking so good on camera. As it is not moral in real life.

Posted by Vixen Strangely at 11:34 PM

What a fabulous photograph. It looks like she's just stopped them in their tracks with the power of her presence.

Ubiquitous video available in real time will change a great deal of our societal norms. Some of these changes will be beneficial - official misconduct will no longer be viewed through the lens of the official narrative - and some of these changes - particularly in the realm of personal privacy - will have high social costs.

The idea of putting cameras on phones was just a marketing driven product evolution - CCDs and image processing silicon were so cheap there was no reason NOT to just add them on to the hardware. Nobody realized at the time how that would change the world. Now, of course, they are on every streetcorner, in drones, in parking lots, on front porches, in cars - our lives are being imaged more than they are not....