He Hates America--It's What He Does 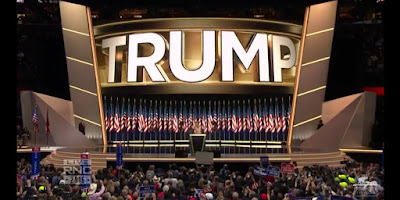 Donald Trump has been talking about how he would make America "great" again, as if it was not now pretty great, as if it was not the land of opportunity that immigrants want to come to, as if it wasn't a place where at least people like himself enjoyed civil liberties like freedom of speech, as experienced by him as around the clock media coverage.

Here's the son of an immigrant, and the heir to a fortune, who wants to complain about how America is treating people. Like himself. Who was always, always, always, insanely privileged. Cash to burn up getting recognized as a building magnate. Cash to burn up on this campaign against someone who will actually commit to doing the job of governing this country, which Trump is too full of himself to do. And a mouth full of how this country is crime-ridden and terrorism-threatened. He says he's the man to rescue us. But how?

He hates us. He hates immigrants, especially if you are brown and speak something other than English. He hates gays, or he would not have picked Mike Pence, no matter what he says. He hates people who practice Islam. He hates. He promises us the truth--and he lies.

He set out his speech, which should have been positively about how he would make America better, with a hatenanny about how today's America sucks. I won't forget that his "Make America Great" is based on thinking we are not--he thinks we are losers. He doesn't get us. We deserve better.
Posted by Vixen Strangely at 12:31 AM