Global, Asymmetrical War, or Some Jackass With A Truck 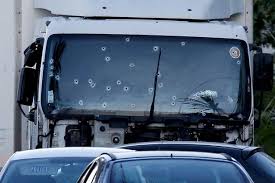 The horror of Bastille Day in Nice is undeniably real. But before I say anything at all on this, I want to get the obvious out of the way: this is just as tragic and terrible if the dumbfuck who did it had all the fucking ties to terrorism that even the most dedicated Islamist-hater ever wanted--or was just some burk with depression and a drug habit.

We're supposed to pretend it does make a difference, of course, and prioritize the idea that there is a global war on terror and a sophisticated network of murderous jackwagons who want to do all reasonably civilized people in because of an overwhelmingly persuasive extremist ideology that is somehow "winning" hearts and minds despite being really grotty and uncool.

But it kind of happens that isolated randos whose lives have sort of turned to shit can just ex post facto declare themselves to be jihadis and do something especially heinous, and have the globe ooh and ah over it like they just cracked the code for dissolving glioblastomas, or maybe invented a better flavor of chips. And depending on the quantitative murderousness of their efforts, we can retroactively posit a qualitative intent. Which might not even be valid, since deliberatively, wrecked bodies strewn along any road whatsoever don't actually do fuck all to make anyone freer, happier, or better off.

So while I grieve alongside the families and actively object to what has happened here, the simple reality is that intent doesn't matter. Was it terror, insanity? There isn't a difference. This isn't a tactic of any rational war, and there is no reason at all for it to have happened. It is beyond reason, or hope of rational result. The frightening thing we might be staring at with global terror is that much of it is just because. Because one isn't happy. Because one isn't employable. Because one has the means.  The horror is no less. But we need to think about deprogramming people from the idea that violence is effective.

And many of our narratives about terror, and the "do something" urge, lend to the idea that it is. We are playing a stupid game with human lives, and it needs to end. I already forget the name of the idiot that did this monstrosity, and invite everyone else to do the same.

Posted by Vixen Strangely at 12:28 AM