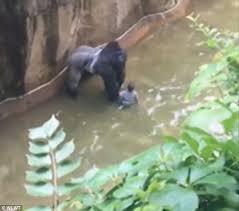 Although it seems like many people are apt to fault the mother of the child who climbed down into the gorilla display at the Cincinnati Zoo for inattention, I find it very hard to do so.  A lot of parents become momentarily distracted--and find to their shock that a moment is all it takes for their child to cover some distance on an impulse its highly-curious mind hasn't the brakes to quell. The horror at what had happened to her child was genuine; I don't think she was negligent and I definitely think that the Cincinnati Zoo should consider some way to make the enclosure more curious-child proof.

As for Harambe, I kind of understand the idea some animal-lovers have that he was not acting in an especially threatening way, or they want to recall an incident where a gorilla in a similar situation seemed to be protecting a fallen child. I think they might be missing that the last seconds before the animal was shot happened very rapidly and the child was dragged--even if in the gorilla's mind he was just moving a juvenile primate from a treacherous moat, the reality is that human children are fragile, and a 450 lb gorilla could easily rip out a child's arm or bash its head. There was no way for the zoo personnel to be sure what would happen, so they had to make sure that a disaster was avoided. It is a shame that Harambe's natural curiosity drew him towards the toddler. But once the child was being dragged, I don't think the Cincinnati Zoo folks were wrong not to take any chances with the baby's life.

Some people comment that this is a problem with the whole idea of zoos altogether, and the forced incarceration of sentient beasts for human visual consumption. We treat them as spectacle, even though they are wild and should be free. We've inherited a notion about our mastery as humans over the various other lifeforms on this planet and treat them as exotic spectacles--and while we try to be well-educated in their care and protection, we can fail spectacularly because they were not meant to live in our world.  I can see this point, but also recognize that the education and conservation aspects of zoo culture in some ways has been protective for endangered species, and gives people access to understanding them in an immediate way that informs their understanding and ability to care about them, which would only be more remote and abstract otherwise.

Primates are, after all, very curious. We are drawn to things that are exotic. It's a bit of a gift and a curse.