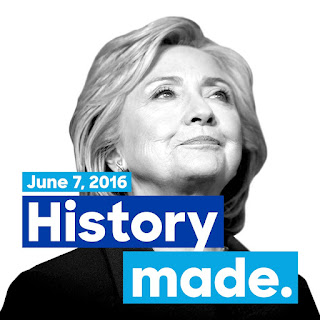 The Democratic Party has now elected its first woman presidential candidate, and I congratulate Hillary Clinton for making history. Although the AP story of the previous night broke the possibility that former Secretary of State Clinton had secured the requisite number of delegates if superdelegates were factored in, I did not think that particular information should either steal the thunder of Tuesday's returns or affect, however it might, the significance of the actual pledged delegate victory.

(Some of the reporters who covered that call experienced harassment for their accuracy. In covering the horserace of politics, regular checking on superdelegates isn't unheard of to gauge the stakes of the moment. But reporters are not refs. They aren't impacting the race by taking the temperature of the people voting in it--it's a bit like a losing team vandalizing a scoreboard for putting up numbers they don't like.)

But it was already expected that Clinton's journey towards the nomination was likely to be called shortly after the polls closed in New Jersey, owing the to lead she aready possessed and reinforced with her finishes in the US Virgin Islands and Puerto Rico. The notion that superdelegates might already have decided was probably obvious from her weekend dominance and the likelihood that she could not possibly claim less than the requisite amount of delegates in the existing contests.  I simply never thought California (why not a hinge on either Dakota?) mattered in the sense of disqualifying Clinton from what she had accomplished.  She's won the popular vote, the pledged delegates, and the superdelegates. The truth be told, she showed dominance with many demographics, and she importantly won big states, and by rather a lot. She simply did better. She beat Bernie Sanders because more people voted for her. End of story.

Did she get more press? No. Did she do more press avail? No. Did she spend more on television ads? No.  Did she have honking huge rallies? No. Is she perfect? No. And does she have baggage? Well yes, but sometimes that is just preparation for a long journey--right?

Never in US history did we ever have a perfect candidate, but we have an imperfect female candidate now, and she is several times over better than the racist, sexist shitlord the GOP is running. And I have sort of, kind of, wanted someone like Hillary Clinton to run as president and make it happen since it was 1992 and I only just found out who a Hillary Clinton even was, and voted for her husband knowing that,  on some level, I really wanted her to be more than just a First Lady, because she seemed to be more than just a stereotypical idea of a political wife, but a feminist liberal contender.  She wasn't just there but stepped up. She raised feminist causes by talking about humanitarian ideals.

I appreciate what she had done, and I appreciate the millions of voters who also agreed. I understand that she faces not just the overextended bullshit of her vey recent past, like the umpteen inconclusive Benghazi investigations, but also the zombie lies that continue to be perpetuated from her husband's time in office. I know her accomplishments.  I am prepared to stare blankly into the faces of her haters for all they want to make up or throw down, because this is my candidate. I am with her.

I may not support everything she ever does, like I never did with her spouse, with Carter, with Obama. (Just Democrats who happened to have office within my lifetime.) But I know what Trump would do would have no room for my input at all.

I endorse, happily, seriously, Hillary Clinton. She understands and she listens. She knows. And she will work for you, America.  I think she'll be great.

Posted by Vixen Strangely at 1:18 AM

Although "zombie Lies" is hurtful.

Already, I can see my conservative friends going nuts on social media. They have no ability to be proud of supporting Trump (although of course they do) or of his 'positions' on the issues, so they are starting to dredge up every innuendo, derogatory name, and slander possible.

Yeah--I think I might feel the same about "vixen lies" if that was a thing--maybe they should be considered "revenant untruths"?

Hillary's baggage has, in many instances, been autoclaved in the steambath of overexposure. Trump, on the other hand, has had his bullshit kept on ice to be thawed at the time of anyone's choosing. Which is rather handy!