Put on Your Clown Shoes and dance the Blues 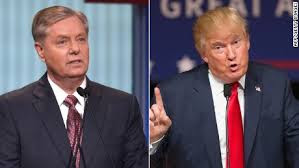 If Trump wants you to run, you'll run to him, and if he says hide, well. Per an earlier report, Lindsey Graham was privately asking other conservatives to support Trump.  But he says he isn't doing any such a thing.

And I actually don't know which report I like better.

Posted by Vixen Strangely at 11:02 PM

Email ThisBlogThis!Share to TwitterShare to FacebookShare to Pinterest
Labels: best of the worst 2016, lindsey graham, trump

There is no doubt Lindsay is supporting Trump and privately telling others to do so as well. They all fall in-line. Always, because they know the power they get despite the vessel will allow them to enact their hateful and evil ideology.