ISIL is to Blame for the Death of Kayla Mueller 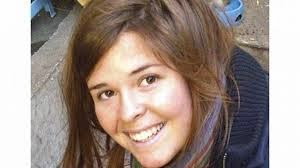 The death of US hostage Kayla Mueller was confirmed today. The family of the deceased were contacted by the terrorists and provided a picture of her that gave no indication of the manner of her death.

ISIL had indicated that she had been killed due to the Jordanian airstrike--but that sounds really self-serving for them, and they obviously lie about this sort of thing because they were going to try to bargain with the already-dead body of Moaz al-Kasasbeh. Who can really say if they didn't actually slay her in a tit-for-tat over the execution of Sahida al-Rishawi, and only realized later how really, really shitty that would look?

As the "crime scene" is in ISIL's hands, the possibility of an investigation is highly difficult because the evidence is already going, going, gone. But in the end, ISIL is responsible, because they took her hostage in the first place. She was a humanitarian who genuinely cared about the displaced and suffering people of the world. She had not done one thing that the murderers who comprise that group could call any threat to them. Her death is senseless. But ISIL is absolutely to blame, whether they directly harmed her, or whether their holding her put her needlessly in harm's way.
Posted by Vixen Strangely at 12:05 AM