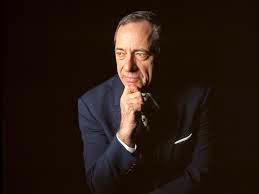 It seems a shame to be starting off the New Year with the sad news that former New York Governor Mario Cuomo has died, about six hours after the swearing-in of his son for his second term as New York Governor.

I think it stands as a testament to the man's qualities that people actively dogged him to run for president, even when it became clear that he didn't like his own chances very much. They knew he was a good guy who could have run well. He suspected that wasn't what would get him in good. So he stuck with the job he had and was good at.

His speech at the 1984 Democratic National Convention is hailed as one of politics' great speeches, where he gored Reagan's so-called "sunny optimism" in the ideal of a "city on a hill" to address economic inequality (Brother Mario Knew His Class War).

Maybe he underestimated himself. Bill Clinton used some of that understanding of how to directly address economic issues in his own successful run, and if he was a better person, John Edwards might have gotten further with his "two Americas".

Governor Mario Cuomo was an unusual thing in politics--an honest man, and the degree to which he cared wasn't in doubt.

He, and the environment that let an honest man run and persevere, will be missed--I hope we will see the like again.

(EDIT) Just to add this nice story about him breaking the news to his parents that he was thinking about going into politics, by telling them it was step to possibly becoming something important like a judge. There was talk of him being a possible SCOTUS pick at one time, too.)
Posted by Vixen Strangely at 11:59 PM

I feel we won't see his like again in a long, long time. Thirty years after his DNC speech, and it's more relevant than ever.