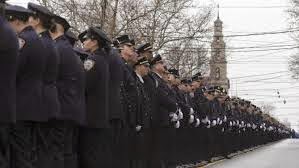 A number of NYPD officers turned their backs in protest during the funeral of Officer Wenjian Liu, whose funeral had been delayed while relative in China made arrangements to be in attendance. This protest occurred despite the wishes of the family and Commissioner Bratton that there be no such display, and as with the earlier display at Officer Ramos' funeral, I feel no differently.

Having done this once, I am not sure why this needed to be done at a second funeral or what additional message is being sent or what message was believed to be sent in the first place. If there was a true deep grievance to be articulated--I would say there's a better way to do it. Otherwise, even while I appreciate the point of protest in general, I don't get this particular version. My sympathies remain with the family and loved ones of Officer Liu.
Posted by Vixen Strangely at 9:24 PM