How Women Can Be Seen, or Not 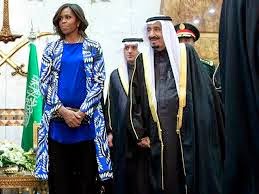 A little bit of a furor came about over First Lady Michelle Obama's decision not to cover her head in Saudi Arabia when meeting the new Saudi king. I don't know why.The way I see it, the decision to cover one's head is very personal. If a woman chooses to wear a hijab or a tichel, it should be her choice, based on her convictions. I would fight for a woman's right to wear what she prefers.  Michelle Obama doesn't wear a head covering in the US or in most countries. We have many pictures documenting her not wearing any kind of head covering. It would be a weird kind of deference to start just because she's in Saudi Arabia--and where do you draw the line? She dressed moderately and appropriately, and like a modern western woman. This is what she is.

I have some reservations about the custom of head covering or veiling. It can be seen as being about modesty--but in some respects I see the argument that it can be about enforcing conformity and erasing certain aspects of individuality in women in order to "disappear" them. There's this amazing picture of former First Lady Laura Bush amid such similarly-dressed women: 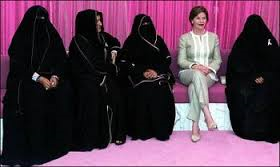 ﻿
That she stands out as impossibly chic and individual. This isn't to minimize the women on the panel with her--just to note that culturally, her face, freedom of movement, and ability to be relaxed and herself seem so much more apparent here. And while these women might enjoy an outstanding inner life, I can't help but wonder if their accomplishments disappear, like their faces, simply because they aren't seen.


This is something I've noticed recently--culturally, some people will go rather out of their way to avoid seeing women (in this case, Angela Merkel, in a previous case, Hillary Clinton). Is this to avoid also coming into collision with our ability to achieve, think, feel, and react to the world around us?

This minimization of the appearance of women seems like a foreign thing--it isn't entirely. There have been US congressional panels on subjects pertaining to women--such as about birth control--that have involved no women at all.

And when we are noticed physically--sometimes the result is reductionist, sexist, absurd--take this obit in The Australian of the fine novelist Colleen McCullough, whose Masters of Rome series enthralled me and awakened a love of history in me and a passion for understanding history as a story about people. (Do look into this series if you haven't--so well-researched and well-done!) Is it not grotesque to reduce a person to whether she was physically attractive (an opinion!) or not? Would this even be imaginable for a male author?

This is why I cheered Megyn Kelly of FOX News  for being visible against sad prude 2016 presidential contender Mike Huckabee, who made the dumb comment that he thought women in New York (and not Iowa, mind you) were trashy for cursing. She pointed out:

"Well I do have news for you before I let you go. We are not only swearing. We're drinking, we're smoking, we're having premarital sex with birth control before we go to work—and sometimes boss around a bunch of men!"

Um, exactly. We're people. We do stuff. We live. And being judged just for being, or having someone pretend "well these women are nice and these other women are trashy", or being treated as if our piety, dress, jobs, attractiveness, or other criteria, determine our worth as people, is just nonsense. Women are people. Like, newsflash. We have faces and wear the clothes we want and say what we want and even can run countries. It's no big. Not sure why it is seen otherwise.
Posted by Vixen Strangely at 1:03 AM

I absolutely agree. You enter into your religious doctrine voluntarily - and therefore you accept its dictates and taboos. If I don't accept that doctrine, there is absolutely no requirement or expectation that I nonetheless follow its mandates.

Also, there is a very strong misogynist streak running throughout the Abrahamic traditions. The expectation that women should be anywhere from subservient to chattel is widespread. But the covering in Islamic communities is a particularly toxic kind of implementation. It is highly coercive - the women are expected to accept the religion, and that means they must accept whatever the clergy impose upon them. But beyond that, this odd fixation on sex and sexual behavior in one of the most prudish cultures in the world is bizarre. It demonstrates a kind of arrested, adolescent cultural development I find wholly distasteful..

Signora Vixen, I seldom approve of anything President or Michelle Obama do.

In this case, I applaud both of them. These symbolic gestures are very important and have a resonance beyond the specific event.

The Scottish church (mostly Presbyterians) were very upset when Queen Elizabeth wore black when meeting the pope. Black as the color of penance and Queen Elizabeth is the head of the Church of England. So by wearing black it was suggesting that there were something inherently penitent about Protestantism. The Scottish church is notoriously Protestant (Freemasons originated in this area) and so it was regarded as a definite no-no.

Laura Bush and Michelle Obama, while presenting themselves dressed in typical Western garb right in the midst of a place where an Islamic woman could conceivably have suffered severe punishment for similar dress, made statements of the West and modernity not bowing to primitive and barbaric customs.

In addition, the President as head of state and the First Lady have no requirement to kowtow to the customs of another country unless they are feeling generous.

I was saddened myself when President Obama felt the need to bow to so many foreign dignitaries, but treated Queen Elizabeth in a offhanded way. Well, he has redeemed himself to some extent with the First Lady standing as a vivid reminder to all those potentates, to people in the Middle East who saw it on TV, and to the Western world that the United States is a sovereign nation.

We are in a war with Islamic radicalism, and frankly, in present times our countermeasures have been weaker than they should be. The entire West would be well advised to insist that if you wish to immigrate to our Western countries, you should plan to assimilate.

Good on her for standing up to the wretched Saudi Wahhabists.

It would be a weird kind of deference to start just because she's in Saudi Arabia--and where do you draw the line?

I think it would be reasonable to draw the line at funerals. I mean, if hypothetically it was considered to be obscene for a woman to appear without her head covered in public in Saudi Arabia, then I think she should follow the local norms when she attends a funeral there (likewise, there are places in the world where woman go outside topless. If someone from that part of the world came to a funeral in the U.S., I would say that person should probably wear a top to avoid offending people at the funeral).

On the other hand, the norms of Saudi Arabia were exaggerated a bit in the media when they covered this kerfuffle. Foreign women have appeared in public in KSA without a head covering. So because it is not offensive to the hosts, there was nothing wrong with Michelle Obama deciding not to cover her head when she visited.