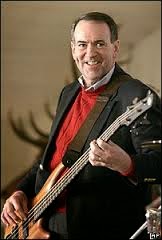 I'm not even sure I'm being facetious about claiming that the announcement of former AR Gov. Mike Huckabee that he was dropping his FOX News show to explore a White House run in 2016 is "good for former MA Gov. Mitt Romney".  On one hand, I'm just basing this on the likelihood that the affable Southern pastor is more likely to catch on with the FAMiLY Leader folks in Iowa than will my former senator, Rick Santorum.  Sen. Santorum camped out in Iowa for 2012 for a long time, and so barely squeaked out a win over Romney in that primary race that it simply did not register until after New Hampshire was over. As I recall, Huckabee took Iowa pretty solidly in 2008. Second place finisher in 2012 or not, with Huckabee's entrance into the race, Santorum can expect his race over before it's begun.

Which would be great for Mitt Romney if, as sort of expected, he does run again--even if some family members suggest he never really even wanted it last time. Which I don't believe for an instant because when I last saw him in 2012, he was running like somebody who wanted the job. But then there's Bush, Jeb Bush.

Jeb Bush is the real monster for a possible Romney redux--he would hork up a good piece of the corporate sponsorship and his name recognition is...well.

As a Democrat, the world in which Jeb and Mitt split the big-dollar donors and slug it out to the death over the airwaves actually brings hot little tears praising Citizens United to my eyes. I feel so guilty I will have to drink some prosecco while I think about that.

That's a lot of characters who haven't done anything since 2007. That Hillary Clinton was Secretary of State a hot minute ago in comparison--which is foreign policy experience none of their asses ever had, makes me feel things.

Yes. I know Rand Paul has his dad's Ames Straw poll-winning apparatus as an inheritance and has done his part to undermine Hillary Clinton's foreign policy chops with some frankly dodgy conspiracy theorist nonsense. And also, too, he has the benefit of being elected for something way more recently than the four guys I just talked about.

This 2016 deal could be interesting.

(Nota bene also--Santorum, Bush, Huckabee, and Romney are all a little more statist or "Big Gummint" than mainstream conservatism at the moment. Reason to believe that while Washington insiders love these guys, like the big fall of Eric Cantor to David Brat--there is stuff going on with conservatives not registering on the conventional wisdom needle, and cats like Rand Paul or Ted Cruz could be spoilers.)
Posted by Vixen Strangely at 12:05 AM